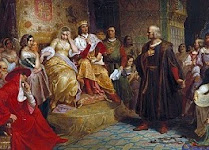 We saw in a recent post how the Scholastic theologian Bartolomé de Las Casas vigorously defended the rights and dignity of the American Indians against the cruelty of Spanish conquistadors.  Las Casas in no way minimized the extent of this cruelty.  On the contrary, he is commonly accused of exaggeration and overzealousness.  So what did Las Casas think of Columbus?  Did he condemn him as an initiator of oppression?

Quite the opposite.  As Anthony Pagden tells us in his introduction to Las Casas’s A Short Account of the Destruction of the Indies:

Las Casas's understanding of the historical and eschatological significance of the discovery and conquest of America contrasted an early vision of peaceful settlement with the rapacious horrors of the conquests which followed.  Columbus, whose diary he preserved and edited, had, in Las Casas's view, been chosen by God for his learning and virtue to bring the Gospel to the New World.  It was for this, he wrote, ‘that he was called Christopher, that is to say Christum ferens, which means carrier or bearer of Christ’.  It was the Spanish settlers… who had transformed a trading and evangelizing mission… into genocidal colonization. (p. xv)

Like Las Casas, some contemporary historians have rejected any suggestion that the attitudes and actions of later settlers can justly be attributed to Columbus himself.  He does not fit the caricature painted by the mobs of ignorant bigots pulling down his statues.

For [Columbus’s] exploit is in itself the highest and grandest which any age has ever seen accomplished by man; and he who achieved it, for the greatness of his mind and heart, can be compared to but few in the history of humanity.  By his toil another world emerged from the unsearched bosom of the ocean: … greatest of all, by the acquisition of those blessings of which Jesus Christ is the author, they have been recalled from destruction to eternal life…

We consider that this immortal achievement should be recalled by Us with memorial words.  For Columbus is ours… it is indubitable that the Catholic faith was the strongest motive for the inception and prosecution of the design; so that for this reason also the whole human race owes not a little to the Church…

We say not that he was unmoved by perfectly honourable aspirations after knowledge, and deserving well of human society; nor did he despise glory, which is a most engrossing ideal to great souls; nor did he altogether scorn a hope of advantages to himself; but to him far before all these human considerations was the consideration of his ancient faith... This view and aim is known to have possessed his mind above all; namely, to open a way for the Gospel over new lands and seas…

It is fitting that we should confess and celebrate in an especial manner the will and designs of the Eternal Wisdom, under whose guidance the discoverer of the New World placed himself with a devotion so touching.

In order, therefore, that the commemoration of Columbus may be worthily observed, religion must give her assistance to the secular ceremonies.  And as at the time of the first news of the discovery public thanksgiving was offered by the command of the Sovereign Pontiff to Almighty God, so now we have resolved to act in like manner in celebrating the anniversary of this auspicious event.  (Leo XIII, Quarto Abeunte Saeculo 1-3, 7-8)

“On October 12, exactly five centuries ago, Admiral Christopher Columbus, with his three ships, arrived in these lands and planted the cross of Christ,” John Paul said.  “That is the beginning of the sowing of the precious seed of faith.  And how can we not give thanks for that?  [The Europeans] announced the love of God our savior to people whose sacrifices to their gods included human sacrifice.”  The Roman Catholic Church was at the forefront of efforts to curb the abuses that followed, he said. (“Pope Lauds Church’s 1492 Role,” The Washington Post, October 13, 1992)

Notice what the views of Las Casas, Leo XIII, and John Paul II have in common – the conviction that the Catholic faith is true.  And if it is true, then the benefits of Columbus’s bringing of Christianity to the New World outweigh everything else, for they concern the eternal salvation of souls.  Left-wingers are often willing to overlook the racism of thinkers like Margaret Sanger and Karl Marx, because they believe that the ideas they are best known for are good and important.  In fact those ideas are vile, but it is certainly reasonable to insist that a person ought to be evaluated in terms of his whole life and thought, and not merely his worst aspects.  How much more so in the case of Columbus, a sincere Catholic who, though not a perfect man, was not personally guilty of the wrongs falsely attributed to him?

But one need not believe in the salvation of souls in order to see the point.  For the irony is that it is in the name of values that the liberal, secular West inherited from Christianity that Columbus’s critics condemn him – values the critics wouldn’t have in the first place were it not for the Christianization of the Americas that Columbus initiated.  If they were to undo what Columbus did, they would undo themselves.

Addendum: Since it's a holiday, some celebratory music might be appropriate.  So give a listen to the old swing tune "Christopher Columbus," whether the classic Fletcher Henderson version, the Duke Ellington remake, or Dinah Washington's vocals.