Some years ago, at an initially friendly dinner after a conference, I sat next to a fellow Catholic academic, to whom I mildly expressed the opinion that it had been a mistake for Catholic theologians to move away from the arguments of natural theology that had been so vigorously championed by Neo-Scholastic writers.  He responded in something like a paroxysm of fury, sputtering bromides of the sort familiar from personalist and nouvelle theologie criticisms of Neo-Scholasticism.  Taken aback by this sudden change in the tone of our conversation, I tried to reassure him that I was not denying that the approaches he preferred had their place, and reminded him that belief in the philosophical demonstrability of God’s existence was, after all, just part of Catholic doctrine.  But it was no use.  Nothing I said in response could mollify him.  It was like he’d seen a ghost he thought had been exorcised long ago, and couldn’t pull out of the subsequent panic attack.

The Latin followers of the medieval Islamic philosopher Ibn Rushd or Averroes (1126 - 1198), such as Siger of Brabant, famously taught the doctrine of the unity of the human intellect.  The basic idea is this: The intellect, Averroists (like other Aristotelians) argue, is immaterial.  But in that case, they conclude (as not all Aristotelians would), it cannot be regarded as the form of a material body.  It is instead a substance entirely separated from matter.  But matter, the Aristotelian holds, is the principle by which one instance of the form of some species is distinguished from another.  Hence there is no way in which one human intellect could be distinguished from another, so that there must be only a single intellect shared by all human beings.
Read more »
Posted by Edward Feser at 9:07 PM 72 comments:

I’ve had a number of book projects in the works for a while, one of which, my edited volume Aristotle on Method and Metaphysics, appeared last summer.  Next on the schedule is Scholastic Metaphysics: A Contemporary Introduction, which will be out next year from Editiones Scholasticae/Transaction Publishers.  You can read a little about it here.  More information to come.

My article “Between Aristotle and William Paley: Aquinas’s Fifth Way” appears in the latest issue (Vol. 11, No. 3) of Nova et Vetera.  The article is fairly long and is by far the most detailed exposition and defense of the Fifth Way I’ve yet given, going well beyond what I say about it in The Last Superstition and Aquinas.
Read more »
Posted by Edward Feser at 6:39 PM 13 comments:

Some questions on the soul, Part III


In some recent posts I’ve been answering readers’ questions about the Aristotelian-Thomistic (A-T) understanding of the soul.  One more for the road, from a reader who is unclear about why mind-body interaction, which is notoriously problematic for Cartesian dualism, is not also problematic for A-T.  The reader writes:


[U]nless something like dualist interactionism is true, I don't see how… immaterial thoughts and - in particular - the will - could possibly cause me to do something as simple as typing this e-mail…


Science would seem to say that the efficient cause of this was certain electrochemical reactions in my body.  The material cause would be the physical events happening in my body.  It seems that A-T philosophy would hold that the final cause was getting an answer to a philosophical question, and I agree.  My soul would then be the formal cause, but I guess that notion is incoherent to me… And, unless the immaterial mind somehow interacts with my body (through quantum physics, maybe?), I don't see how my thinking about something in my immaterial intellect could cause my body to do anything.
Read more »
Posted by Edward Feser at 4:22 PM 125 comments: 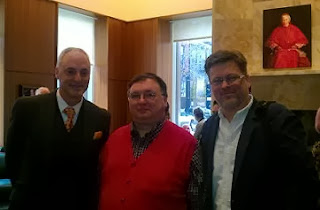 Back today from the “Thomas Aquinas and Philosophical Realism” symposium in NYC.  While there I had the great pleasure of meeting blogger and statistician to the stars Matt Briggs and blogger and science-fiction scribe Mike Flynn -- names which will be known to many longtime readers of this blog.  The three of us are pictured above.
Read more »
Posted by Edward Feser at 6:47 PM 6 comments:

Oerter is a mensch

Physicist Robert Oerter and I have been having an exchange over James Ross’s argument for the immateriality of the intellect.  In response to my most recent post, Oerter has posted a brief comment.  Give it a read.  I have nothing to say in reply other than that Oerter is a good, honest, decent guy and that if we’re ever in the same town I owe him a beer. 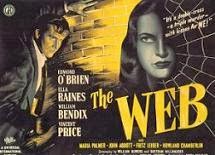 Was the twentieth-century Thomist Reginald Garrigou-Lagrange unduly influenced by Leibnizian rationalism, as followers of Etienne Gilson often allege?  No, argues Steven Long, over at Thomistica.net.  (Be sure to read the discussion in the comments section as well as the original post.)


The debate over Thomas Nagel’s Mind and Cosmos never ends.  Raymond Tallis reviews the book in The New Atlantis, and Jim Slagle reviews it for Philosophy in Review.


You’ve read Sean Howe’s Marvel Comics: The Untold Story and checked in regularly at its companion blog.  Now brace yourself for Blake Bell and Michael J. Vassallo’s The Secret History of Marvel Comics, which has a blog of its own.  It’s a look at the seamier, pulp magazine side of the company’s early history.
Read more »
Posted by Edward Feser at 6:40 PM 37 comments:

This Saturday, November 9, I’ll be speaking at a symposium on “Thomas Aquinas and Philosophical Realism” which will be held at the Catholic Center at New York University.   The other speakers are James Brent, Candace Vogler, J. David Velleman, Thomas Joseph White, John Haldane, and William Jaworski.  More information here.

On Saturday, December 7, I’ll be speaking at a colloquium on the theme “New Scholastic Meets Analytic Philosophy” at the Lindenthal-Institut, Cologne, Germany.  The other speakers are David Oderberg, Edmund Runggaldier, Erwin Tegtmeier, Stephen Mumford, and Uwe Meixner.  More information here.