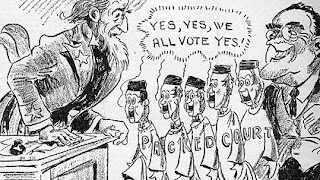 No one who claims to favor Biden over Trump on the grounds of protecting “democratic norms” can, at this point, be speaking in good faith.  They are either culpably deceiving themselves or cynically trying to deceive others.  Packing the Supreme Court would be as radical a violation of “democratic norms” as any president has ever attempted.  It would destroy the independence of the judiciary, making of the court a dictatorship for the party in power.  Yet Biden and Harris persistently refuse to say whether they favor court-packing.  Biden has now said that voters “don’t deserve” to know his position on this absolutely crucial issue before the election – even though he acknowledges that “it’s a great question” and says he doesn’t blame people for asking it!  Can you imagine the hysteria that would ensue if Trump gave such a lunatic answer to a question that momentous?  This is reason enough not to vote for Biden, whether or not you vote for Trump.

The reason Biden will not answer, of course, is that his party has moved so extremely far to the left that he can no longer reject court-packing and remain politically viable.  And the depth of his cynicism is evident from the fact that he has himself in the past emphasized how extremely dangerous to a free society packing the court would be.  In 2005, he said that President Roosevelt’s attempt to pack the court in the 1930s showed that he had been “corrupted by power” and that “it took an act of courage on the part of his own party institutionally to stand up against this power grab.”  He condemned “politicians bending to… political exigency” rather than upholding the country’s institutions.  Just last year, Biden said that if Democrats packed the court, “we’ll live to rue that day” and “we begin to lose any credibility the court has at all.”

Yet now, having himself been “corrupted” by the prospect of attaining power, Biden is “bending to political exigency” rather than having the “courage” to “stand up against” the extremist elements in his party – all in the name of protecting democracy against Trump.

Those extremist elements include his running mate, who was one of eleven Democratic presidential primary candidates who said they were open to packing the Supreme Court.  By contrast, even Bernie Sanders rejected the idea, which shows you how extreme it is.  It is so extreme that even the Left’s hero Ruth Bader Ginsburg – in whose name they would pack the court – was opposed to it, as she made clear in an NPR interview last year:

“Nine seems to be a good number.  It's been that way for a long time,” she said, adding, “I think it was a bad idea when President Franklin Roosevelt tried to pack the court” …

Roosevelt's proposal would have given him six additional Supreme Court appointments, expanding the court to 15 members.  And Ginsburg sees any similar plan as very damaging to the court and the country.

“If anything would make the court look partisan," she said, “it would be that – one side saying, ‘When we're in power, we're going to enlarge the number of judges, so we would have more people who would vote the way we want them to.’”

That impairs the idea of an independent judiciary, she said.

End quote.  However bad you think Trump is, he has not transformed the country’s basic political institutions.  His critics shrilly accuse him of being a tyrant and a dictator – perhaps the more paranoid and unhinged among them even believe this nonsense – but the reality is that he has no greater power over the courts, the Congress, the press, and the voters than any other president has had.  If he did, he wouldn’t be in such dire political shape right now.  People who say things like: “Trump’s a dictator!  That’s why he’s about to be voted out!” need to Google the phrase “cognitive dissonance.”

By contrast, Biden is the Kerensky-like Trojan horse for a party that has been so thoroughly taken over by extremists that even its “moderates” are now open to court-packing, not to mention other dangerously illiberal tactics and proposals.  They would fundamentally transform our political institutions in the direction of a one-party state.

It’s that simple.  Trump’s critics are always piously going on about how preserving “democratic norms” is more important than securing short-term political advantage.  It’s time for them to show whether they really mean it.