On-topic open thread (and a word on trolls) 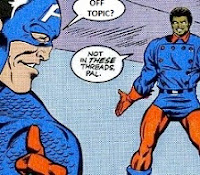 Folks, please don’t post off-topic comments in the comboxes.  I will delete them, and any responses to them, as soon as I see them, and (since I don’t always see them immediately) sometimes that means that a long thread will develop that is destined to end up in the ether.  Remember, if your comment begins with something like “This is off topic, but…,” then it isn’t a comment you should be posting.  And remember too, there is always that remedy for concupiscence known as the open thread.  Here’s the latest.  This time, everything is on topic, from acid jazz to Thomas Szasz, from Family Guy to Strong AI, from the coronavirus to Miley Cyrus.


While I’ve got your attention, a word on trolling.  It’s a continual problem, and sometimes bigger than it needs to be because of people who keep feeding trolls.  Occasionally I have to ban people outright, but as you know, I prefer not to do that.  A handful of trolls over the years have been so insufferable and psychotic that they simply have to be cast forever into that outer darkness where there is wailing and gnashing of teeth.  The marks of such unforgiveable trolls include: a monomania that insists on bringing every discussion around to some irrelevant pet obsession; repeatedly posting the same comment over and over no matter how many times it is deleted; flooding the combox with comments throughout the day or the week; an unwillingness or inability to restrain a penchant for rudeness, obscenity, blasphemy, or personal animus against the host of the blog; and other behavior that normal human beings know to avoid.

But there are other, less extreme trolls whose sins are more minor or who show a willingness to reform.  Marks of this milder kind of troll would be: monomania, rudeness, logorrhea, etc. that manifest only occasionally; irremediable ignorance or muddleheadedness that makes a commenter tiresome and not worth engaging, but that is not manifested in a rude or otherwise obnoxious way; a predilection for comments that are not quite off-topic but are nevertheless banal, ill-informed, weird, or otherwise not substantive; and so on.  Most of these people I simply tolerate.  There are also some who I have had to ban temporarily, but whose return to the comboxes I have tolerated when they have given signs of a willingness to restrain their more obnoxious tendencies.

I leave it to you, reasonable reader, to use good judgment in dealing with such people.  If someone seems to be a crank or otherwise not worth engaging with, then don’t engage with him.  He may have nothing better to do, but surely you do.  And you will be doing a great service to me and to your fellow readers.  Sometimes what starts out to be merely a stupid comment or two that can be left to stand in the spirit of tolerance, turns into a long, pointless, acrimonious thread-killing exchange, all because one or two otherwise reasonable readers wouldn’t resist the urge to feed the troll.  Sometimes I delete this garbage in the hope of saving the thread, but other times, by the time I see it, it is too late.  And in any event, I’m too busy with other things to monitor this stuff hour by hour.