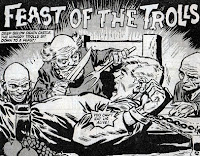 It’s about time for another open thread, so here it is.  From violent crimes to medieval times to cringe-making rhymes, nothing is off-topic.  Still, as always, please keep it classy and keep it civil.

While I’ve got your attention, let me take this opportunity to make several comments about comments.  First, a few readers have complained recently that their comments are not appearing.  In fact, they are appearing.  What these readers do not realize is that after a thread exceeds 200 comments, you have to click on the “Load more…” prompt at the bottom of the comments section to see the most recent comments.  It’s easy to miss, but it’s there.  Click on it and you’ll no doubt find that comment that you thought had disappeared into the ether (and perhaps had needlessly re-posted several times).


Second, with open threads like this one, everything is on topic.  But on regular posts, I urge all my readers not to post off-topic comments and not to respond to people who do post them.  I find threadjacking extremely annoying, and I delete all this stuff as soon as I see it.  (Here’s a tip: If you are inclined to start a comment with the words “This is off-topic, but…,” then don’t bother finishing it or posting it, because I will delete it while uttering some choice cuss words.)  Again, open threads are the places to raise off-topic issues.  You might also try the Classical Theism Forum.

Third, some readers occasionally find themselves exasperated at the propensity of their fellow readers to keep feeding obvious trolls.  I feel their pain.  However, as longtime readers know, I try as far as I can to moderate with a light hand, so as to facilitate free discussion and – frankly – to spare myself work I really don’t need.  I’m way too busy as it is.

Occasionally there are trolls whose behavior is so obnoxious, disruptive, and even psychotic that I have no choice but to ban them permanently.  (With some of these people, there is more to the story than what you’d know just from what appears in the combox.  Believe me, there are some real nuts out there.)  There are others who are just jerks who don’t get the message until I ban them temporarily, but who will more or less behave themselves afterward.

Most trolls, though, aren’t quite as bad as that and needn’t be banned.  They are merely tiresomely banal, or can’t think clearly, or are oddballs, or otherwise have nothing of real interest to say.  As long as they refrain from dumping post after post after post into the combox, they are mild pests at worst.  Unless you feed them.  So don’t.  Don’t even post a short insulting response, however merited.  Just bite your lip and ignore them.  You will be doing both me and your fellow readers a big favor.  And if instead you keep feeding them, you will be complicit in wrecking a thread that might otherwise have been worth continuing.  Think before you post, and before responding to what others post.

Links to previous open threads can be found here.