Aquinas on creation and necessity 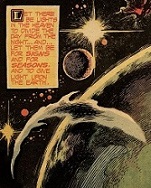 While we’re on the subject of divine simplicity and creation, let’s consider a closely related issue.  In the Summa Contra Gentiles, Aquinas argues that God wills himself, that he does so necessarily, that what he wills he wills in a single act, and that he wills other things besides himself.  Doesn’t it follow that he also wills these other things necessarily?  Doesn’t it follow that they too must exist necessarily, just as God does?  No, neither of these things follows.


Let’s take the two questions in order.  First, as Aquinas also argues, God wills things other than himself only for his own sake.  They are willed as manifestations of his own goodness.  But they are not willed because they somehow enhance his goodness, because that goodness is already perfect.  Hence he doesn’t need to will any other thing as a means to realizing the highest good, which is himself.

Doesn’t this make his willing of these other things arbitrary or inexplicable?  No, that doesn’t follow either.  He wills them for a reason – again, as a manifestation of his own goodness.  Suppose you’ve already got a large family, including some adopted children, but you decide to adopt yet another child.  You don’t need to do this in order to do your moral duty or to achieve supererogatory virtue.  You’ve already not only done your duty but gone above and beyond it.  But it’s not an arbitrary act either.  It’s a good thing to do, even if it’s not a good thing that must be done.  Creation is like that, neither necessary nor arbitrary.  As Aquinas puts it, God wills other things as “befitting.”

But doesn’t the fact that God wills himself and other things in a single act entail that he wills the latter as necessarily as he does the former?  No.  You might say that it is in a single act that the sun both shines and causes the moon to shine.  But even if the sun shined of absolute necessity, it wouldn’t follow that the moon shined, since of course the moon could have failed to exist even if the sun hadn’t.

No, the analogy does not fail, and this brings us to Aquinas’s reasons for saying that the fact that God is necessary does not entail that his effects are necessary.  In the Summa Theologiae, Aquinas writes:

Sometimes a necessary cause has a non-necessary relation to an effect; owing to a deficiency in the effect, and not in the cause.  Even so, the sun's power has a non-necessary relation to some contingent events on this earth, owing to a defect not in the solar power, but in the effect that proceeds not necessarily from the cause.  In the same way, that God does not necessarily will some of the things that He wills, does not result from defect in the divine will, but from a defect belonging to the nature of the thing willed, namely, that the perfect goodness of God can be without it; and such defect accompanies all created good.

Similarly, in the Summa Contra Gentiles, he writes:

From the side of its object, a certain power is found open to opposites when the perfect operation of the power depends on neither alternative, though both can be.  An example is an art which can use diverse instruments to perform the same work equally well.  This openness does not pertain to the imperfection of a power, but rather to its eminence, in so far as it dominates both alternatives, and thereby is determined to neither, being open to both.  This is how the divine will is disposed in relation to things other than itself.  For its end depends on none of the other things, though it itself is most perfectly united to its end.

The relevance of these passages to our question is this.  What makes some effect E of God’s action contingent rather than necessary is not anything in God, but it is also not some third thing in addition to God and his effect E.  It’s not a matter of God needing this third thing to be either present or absent in order for E to follow.  Rather, the source of the contingency is just E itself.  As Aquinas puts it in the passage from the Summa Theologiae, it is simply that limitation that “accompanies all created good” as such that makes God’s effects contingent.  E itself, just by virtue of not being God – and thus not being pure actuality or subsistent being itself or absolute simplicity – is of its very nature going to be contingent.  God doesn’t have to do anything extra to it to make it contingent, and neither does some third thing in addition to God and to E have to do anything to make it contingent.

Similarly, as the Summa Contra Gentiles passage says, precisely because of the “eminence” of divine power, none of its effects can be necessary, because it simply doesn’t require any particular effect in order to realize the end of manifesting divine goodness.  For any particular effect E, some non-E would do just as well, since divine goodness is already perfect just as it is.

Since we’re talking about unnecessary but fitting acts, it is fitting at this point to plug Gaven Kerr’s new book, Aquinas and the Metaphysics of Creation, which, as it happens, just arrived today in the mail.  Since I haven’t read it yet I can’t give you a review, but the author of the excellent Aquinas’s Way to God is sure to have produced a worthy volume.