Neither nature alone nor grace alone 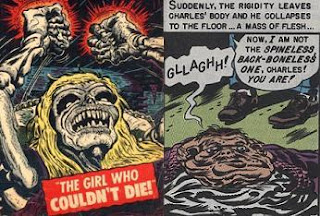 Since therefore grace does not destroy nature but perfects it, natural reason should minister to faith as the natural bent of the will ministers to charity… Hence sacred doctrine makes use also of the authority of philosophers in those questions in which they were able to know the truth by natural reason…


Here’s one way to think about the relationship between nature and grace, reason and faith, philosophy and revelation.  Natural theology and natural law are like a skeleton, and the moral and theological deliverances of divine revelation are like the flesh that hangs on the skeleton.  Just as neither skeleton alone nor flesh alone give you a complete human being, neither do nature alone nor grace alone give you the complete story about the human condition.


By the deliverances of divine revelation I have in mind, of course, what we know of God and of morality from scripture, from the creeds, councils, and tradition more generally, and from the Magisterium of the Church.  By themselves these deliverances are like flesh without a skeleton: warm and human, but also weirdly distorted and unable to stand on its own or to offer resistance.  That is to say, on the one hand the theological and moral deliverances of revelation are more profound than anything natural theology and natural law can give us, and speak to us in a more personal and accessible way.  But they can also seem (when wrongly understood, as they often are) to lack any objective rational foundation, and to reflect a culturally and historically parochial view of human life that cannot apply to all times and places.  To be sure, these purported defects of Christian theology are also, to say the least, greatly overstated, but there is some truth to this caricature too to the extent that Christian theology is not informed by natural theology, natural law, and the methods of philosophy more generally.


There have of course been times when the significance of nature, reason, and philosophy have been overemphasized -- when the claims of grace, faith, and revelation have been deemphasized and religion reduced to a rationalist skeleton.   But the pressing danger today comes from the opposite direction.  Talk of “faith” has been bastardized, so that many believers and skeptics alike wrongly take it to refer essentially to a kind of subjective feeling or irrational will to believe.  Too much popular preaching and piety has been reduced to trashy self-help sentimentality.  Too many philosophers of religion have for too long been playing defense -- maintaining, not that theism is in a position rationally and evidentially superior to atheism, but instead conceding the evidential issue and pleading merely that religious belief not be regarded as less rational for that.  Too many theologians have turned their attention away from questions of objective, metaphysical truth to matters of aesthetics, or moral sentiment, or psychology, culture, or history.


In short, religious believers have been fleeing into a non-cognitive ghetto almost faster than skeptics can push them into it.  They are too often like the hypochondriac in Ray Bradbury’s short story “Skeleton,” who is pathologically fearful of his own bones and ends up losing them -- reduced in the horrific climax to a helpless, amorphous blob.  What Christian theology needs now more than ever is its traditional, Scholastic backbone.