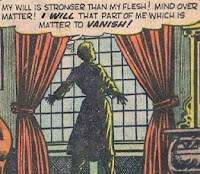 Of course, this is all wrong.  The conception of matter that materialists have inherited from Galileo, Descartes, Boyle, Locke, and the other early modern scientists and philosophers abstracts away these features of the commonsense understanding of matter.  Color, odor, sound, taste, smell, heat, and cold as common sense understands them are said not to exist in matter at all, but only in the mind’s representation of matter.  Matter is characterized instead in mathematical terms, in a purely quantitative rather than qualitative way.  For example, for Descartes, matter is essentially what can be captured in the language of analytic geometry.


The modern understanding of matter thus dematerializes it in the sense of stripping away most of the features that common sense takes to be definitive of matter.  Common sense supposes that matter is essentially the kind of thing that we see, hear, taste, touch, and smell.  The early modern conception holds that properly to understand matter, in fact you mostly or entirely have to ignore what you see, hear, taste, touch, and smell.  Matter is not what the senses tell us it is.  Knowing matter’s true nature involves an abstract intellectual exercise rather than straightforward sensory experience.  It is a kind of applied mathematics.


Philosophers and scientists of the late nineteenth century and early twentieth century often judged that, given its mathematical bent, the modern conception of matter doesn’t really tell us much about matter at all.  What it gives us is the mathematical structure of matter, but not the nature of the stuff that has that structure.  You see this view, in different forms, in the work of Poincaré, Duhem, Russell, Eddington, and others.  Now, if you read the thesis that everything is material in light of this point, then the thesis turns out to be highly indeterminate.  It is really saying something like everything has such-and-such a mathematical structure.  That is not uninformative, but it is also not nearly as informative as materialism at first seems to be.


The reason it does not rule such claims out is that to say that everything has such-and-such a mathematical structure does not entail that the nature of everything that exists is exhausted by a description of its mathematical structure.  It could turn out that everything that exists has the mathematical structure that physics uncovers, but also has further properties, in addition to that, of which physics tells us nothing.  That is what Russell thought, and it is what contemporary writers influenced by Russell (like David Chalmers and Galen Strawson) have also proposed.  Now, if we allow that qualia can be among the intrinsic features of matter, then, as Chalmers notes, we end up with a position that is either panpsychist or property dualist.  And a position that is compatible with panpsychism and property dualism is not the kind of thing one usually thinks of when one thinks of materialism.  But that is what we get when we read the claim that everything is material in light of the modern conception of matter.


The Russellian view is sometimes called epistemic structural realism.  It holds that the description of the world afforded by mathematical physics is true as far as it goes (hence the view is a kind of realism), but that it is not the whole truth.  Physics can know only the mathematical structure of matter (hence the adjective “epistemic”), but there is more to matter than that.  But one could argue instead that there isn’t more to matter than that.  This is a view sometimes called ontic structural realism.  It holds both that the mathematical description afforded by physics is true (hence it is also a kind of realism), and that it is the whole truth.  Matter is to be identified with its mathematical structure.  There is nothing more to its reality than that (hence the adjective “ontic”).


Something like this view is defended by philosophers such as James Ladyman and Don Ross in their book Every Thing Must Go: Metaphysics Naturalized, and by the physicist Max Tegmark.  I have a lot to say about Ladyman and Ross’s project in the forthcoming Aristotle’s Revenge, all of it critical.  Suffice it for present purposes to note that this sort of view essentially identifies the physical world with a kind of Platonic abstract object.  Ladyman and Ross try to deal with this problem by denying that there is a clear distinction between abstract and concrete.  As I argue in the book, this position is incoherent and the arguments for it are entirely question-begging.  Moreover, even apart from that it doesn’t really solve the problem at all, because (as the Aristotelian would argue) Platonism itself essentially blurs the distinction between the abstract and the concrete.  For a Platonic Form is characterized both as a universal (and hence as abstract) and as a substance (and hence as concrete).  To blur the abstract/concrete distinction is to fall deeper into Platonism, rather than to avoid it.


The way the Neo-Platonist tradition solved this problem of blurring the abstract and the concrete is essentially by conceding to Aristotle the thesis that universals exist only in intellects, and locating the realm of the Forms in an infinite divine intellect.  For Plotinus this intellect is the first emanation from the One, and for Christian Platonists it is God himself.  Now, if you take the world to be a kind of Form or abstract object and add the thesis that such objects exist only in intellects, then you have what amounts to a kind of idealism or even (depending on how the intellect in question is characterized) a kind of pantheism.  Eddington and James Jeans, another twentieth-century physicist, explicitly went in an idealist direction.  Contemporary writers who suggest that the universe might be a kind of computer simulation, and the abstract structure described by physics to be the software underlying the simulation, come pretty close to idealism or pantheism.  The universe qua computer roughly corresponds to the Absolute Spirit of an idealist and pantheist like Hegel, and the computer simulation to the unfolding of this Spirit in history.  Again, not the kind of thing one usually associates with materialism.


So, if we start with the modern materialist’s conception of matter and start to unpack it, materialism ends up being transformed into one or another of the various views that one would have thought to be at odds with materialism – dualism, panpsychism, Platonism, idealism, or pantheism.


A similarly surprising result follows if we start instead with the materialist’s conception of mind.  The prevailing tendency for decades now among materialists has been to think of the mind in functionalist terms.  That is to say, it is to analyze mental phenomena in terms of what they do rather than in terms of what they are made of.  That idea, in turn, is typically developed in terms of the thesis that the mind is a kind of software that can be run on any number of different kinds of hardware.  On this analysis, mind, like matter, turns out to be a kind of abstract structure.  Like matter, it is essentially dematerialized, in the name of materialism.  And you get other results that sound odd coming from a materialist, such as the idea that a mind might jump from one embodiment to another by way of software being uploaded from its old hardware and downloaded onto new hardware.  (Transmigration of souls, anyone?)


When you combine the mind-as-software idea with the universe-as-computer idea, you get the result that the individual human mind is like one of many programs running against the background of the same operating system.  This is reminiscent of the relationship between individual souls and the “world soul” in some pantheist and idealist systems.


I would speculate that the reason more materialists don’t see how close these various implications are to views that are usually thought to be the opposite of materialist is that many of them simply don’t know very much about the history of non-materialist philosophy, or the history of philosophy in general.  In particular, they often have an extremely crude conception of the soul (as a piece of ectoplasm, or as a ghost) and an extremely crude conception of God (as a really big piece of ectoplasm or an especially powerful ghost).  Hence their understanding of what Platonic, Aristotelian, Scholastic, idealist, rationalist, etc. philosophers mean when they use terms like “soul” and “God” is laughably off-base, even when they have any knowledge at all of what such thinkers have said.  Ironically, they more or less materialize these immaterial realities, just as they dematerialize matter.


Five Proofs of the Existence of God, Chapter 3