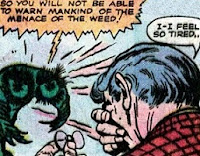 The immorality of perverting a faculty is far from the whole of natural law moral reasoning, but it is an important and neglected part of it.  The best known application of the idea is within the context of sexual morality, and it is also famously applied in the analysis of the morality of lying.  Another important and perhaps less well known application is in the analysis of the morality of using alcohol and drugs.  The topic is especially timely considering the current trend in the U.S. toward the legalization of marijuana.

Before proceeding, the reader is asked to keep in mind that “perverted faculty arguments” in traditional natural law theory deploy the concept of perversion in a specific, technical sense.  The perversion of a human faculty essentially involves both using the faculty but doing so in a way that is positively contrary to its natural end.  As I’ve explained many times, simply to refrain from using a faculty at all is not to pervert it.  Using a faculty for something that is merely other than its natural end is also not to pervert it.  Hence, suppose faculty F exists for the sake of end E.  There is nothing perverse about not using F at all, and there is nothing perverse about using F but for the sake of some other end G.  What is perverse is using F but in a way that actively prevents E from being realized.  It is this contrariness to the very point of the faculty, this outright frustration of its function, that is the heart of the perversity.


There is also nothing necessarily perverse about using some thing other than one’s own natural faculties in a way that is contrary to its end (e.g. using a toothbrush to clean the sink rather than one’s teeth, or using a plant or animal for food).  Moral reasoning is about what I, the moral agent, ought to do.  It is because certain acts would actively frustrate my own natural ends, which are constitutive of what is good for me, that they constitute a perverse exercise of practical reason.  Doing what frustrates some other thing does not per se frustrate my own natural ends, and thus is not intrinsically perverse in the relevant sense.  (It may or may not be wrong for some other reason, but that’s a different question.)   As I have suggested elsewhere, perverting a faculty is in this way comparable in its irrationality to a performative self-contradiction.


I have spelled out the nature of perverted faculty reasoning in detail in my article “In Defense of the Perverted Faculty Argument,” from my anthology Neo-Scholastic Essays.  I respond there to all the standard objections, most of which are based on misunderstandings.  The uninitiated reader who objects to the perverted faculty reasoning that follows is urged to read that essay before commenting, because odds are I’ve already answered your objection there.  For example, please don’t waste your time or mine by raising tired purported counterexamples like the use of ear plugs, a sterile married couple having sex, etc.  I’ve already explained in the article why these do not count as perversions of a faculty.


On to our subject, then: The standard natural law position is that the use of alcohol or drugs is always and intrinsically immoral when (a) it subverts reason, and (b) it does so for the sake of an end which is not itself prescribed by reason.  If conditions (a) and (b) are not both met, then the use of alcohol or drugs is not always and intrinsically wrong (even if certain circumstances might make it wrong).  Let’s elaborate on these two conditions.


First, what counts as subverting reason?  Merely altering one’s mood is not problematic.  As the Thomistic natural law theorist John C. Ford notes in his book Man Takes a Drink: Facts and Principles about Alcohol, the natural law position regards the use of alcohol as legitimate when it merely leads to “a mild lift, or a comfortable sense of relaxation – a mild euphoria” (p. 52), or “mild relaxation, or mild exhilaration, or cheerfulness” (p. 56).  One’s reason can still be perfectly in charge of one’s behavior in this case.  (Thus does Proverbs 31:6-7 say: “Give strong drink to one who is perishing, and wine to those in bitter distress; let them drink and forget their poverty, and remember their misery no more.”)


The trouble comes when reason is either no longer in charge or its control is impaired.  This would be true, for example, of someone who has drunk so much that he cannot think or perceive clearly, or whose moral inhibitions have become relaxed, or whose other inhibitions are lowered to the point where he does things he would otherwise be too embarrassed to do, or whose motor skills have been impaired.


What about condition (b)?  Doing something that one knows will suspend reason is not always and intrinsically wrong.  For example, as Aquinas writes:


For it is not contrary to virtue, if the act of reason be sometimes interrupted for something that is done in accordance with reason, else it would be against virtue for a person to set himself to sleep. (Summa Theologiae II-II.153.2)


The kind of rational thing a human being is is a rational animal, and our animality requires us to sleep, which temporarily interrupts reason.  This is not contrary to our nature, because the whole point of sleep is precisely to preserve the health of the whole rational animal.  Similarly, when for the sake of surgery we take an anesthetic, we temporarily suspend reason but are not acting contrary to reason, precisely because our aim is to preserve the whole organism of which reason is a faculty.  For the same reason, when alcohol or drugs are used for medical purposes even though it is foreseen that they will subvert reason, such use is not necessarily wrong.  The situation is analogous to the amputation of a diseased body part for the sake of preserving the whole body.  Reason temporarily suspends itself precisely for the sake of preserving itself.


What is wrong is when reason is subverted for the sake of something inferior to reason, as when someone deliberately drinks to the point of suspending reason merely for the sake of the more intense sensory pleasure this would bring.  Reason subverting itself for the sake of something inferior to reason is perverse, in the “perverted faculty argument” sense of the word.  It is reason acting directly contrary to (rather than merely other than) its own natural end.  It essentially involves a rational animal deliberately trying to make of himself, if only partially and temporarily, a non-rational animal.


Naturally, there are also other considerations that make intoxication morally problematic, such as the risks to health and safety it can pose.  But it is the perversion of the rational faculty that makes it always and intrinsically wrong to use alcohol or drugs to the point of subverting reason for the sake of mere sensory pleasure.  It is a kind of self-mutilation of rationality, the highest and distinctive human faculty.  Ford writes:


It is interesting to note that some theologians treat of drunkenness, especially habitual drunkenness, under the commandment “Thou shalt not kill.”  The Fifth Commandment, besides forbidding murder and self-destruction, is taken to forbid self-mutilation and to command a reasonable care of one’s own life and health.  There is also a psychological appropriateness in considering drunkenness a kind of suicide.  Especially for the alcoholic, each cup has a little death in it, a little of that oblivion which he seeks, consciously or unconsciously. (p. 74)


Ford’s thesis that the drunkard or stoner seeks a kind of temporary suicide of his rationality is lent support by the way descriptions like wasted, smashed, bombed, hammered, stoned, dead drunk, etc. are used approvingly.


A common libertarian rhetorical trick is to speak as if there is hypocrisy or inconsistency in approving of alcohol while disapproving of other intoxicating substances.  This is quite silly and overlooks an obvious distinction.  It is easy for most people to use alcohol in the moderate way that results merely in the “mild exhilaration” or “cheerfulness” that does not subvert reason, and a great many people do in fact habitually use it in precisely this way.  By contrast, many other drugs are used precisely for the sake of attaining a high that subverts reason.  If someone approves of recreational alcohol use only insofar as it does not subvert rationality, and disapproves of the recreational use of other drugs only insofar as they do subvert rationality, then there is no hypocrisy or inconsistency at all.


To be sure, it is true that sensibilities about what substances it is licit to use in moderation can be to some extent culturally relative and reflect mere prejudice.  Ford gives an amusing example to illustrate the point:


It was only a few hundred years ago that the devout priests of a certain religious order in Europe protested bitterly against the introduction of coffee at breakfast.  They maintained it was expensive, luxurious, imported and exotic, not in keeping with religious poverty, and not befitting men dedicated to God.  They insisted on retaining their traditional breakfast beverage, which was beer. (p. 58)


All the same, not all misgivings about the use of a drug are based on mere cultural prejudice, and the imperative of avoiding the deliberate suspension of reason provides an objective and clear criterion by which to distinguish substances that can be used in moderation and those that should be avoided altogether.


As Plato warned in the Republic, egalitarian societies tend to be increasingly dominated by the pull of the lower appetites, and increasingly impatient with the counsel of reason.  As with our society’s ever deepening immersion in sins of the flesh and the rise of the ridiculous “foodie phenomenon,” accelerating laxity with respect to drug use reflects this decadence, rather than more careful and consistent thinking about the subject.  If you won’t listen to Plato, at least listen to Animal House.