The latest on Catholicism and capital punishment 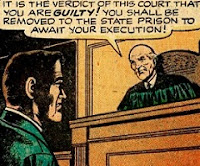 Is there still anything left to say about the death penalty?  Yes, plenty.  In the debate generated by By Man Shall His Blood Be Shed, the focus has been on questions about the interpretation of various individual scriptural passages, and the level of authority of various papal statements considered in isolation.  But the critics have failed to consider the sheer cumulative force of two millennia of consistent ordinary magisterial teaching.  Some of them have also wrongly supposed that, even if capital punishment is legitimate under natural law, the higher demands of the Gospel might nevertheless rule it out absolutely.  In a new article at Catholic World Report, I show that the ordinary magisterium has taught infallibly that the death penalty is legitimate in principle even as a matter of specifically Christian morality.  No reversal is possible consistent with the indefectibility of the Church.  There’s a fair amount of new material in the article that goes beyond what Joe Bessette and I say in the book.

Meanwhile, in the letters section of the February issue of First Things, Joe and I reply to Paul Griffiths’ nasty and question-begging review of the book, and Griffiths responds by doubling down on the nastiness and begged questions.


While you’re at it, take a look at Michael Pakaluk’s recent essay at Public Discourse criticizing the “new natural law” critique of capital punishment.  Christopher Tollefsen replied to Pakaluk at PD, and Pakaluk then responded to Tollefsen at Facebook.