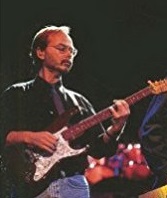 The Steely Dan sound is well known to anyone who has heard even one or two of the band’s best known songs, and founders Donald Fagen and Walter Becker contributed equally to it.  Fagen’s is the voice we associate with that sound.  What we might call the Steely Dan attitude, however, derives in large part from Becker, who died earlier this week.


The attitude is mordant insofar the approach to this subject matter is always bitingly comical.  Rarely quite to the point of mean-spiritedness, however.  And that’s where the absurdism comes in.  Human foibles are magnified in a Steely Dan song – the better, not so much to mock them as simply to facilitate a good laugh.  As Brian Sweet writes of “Gaucho,” one of the funnier Dan tunes: “Becker and Fagen… said that when they were listening back to one of their songs, if it didn't make them howl with laughter, they regarded it as a failure.”


That brings us to detachment.  Several commentators on Becker’s death have characterized Steely Dan’s music as “subversive.”  That’s not exactly right.  That term suggests engagement, or (heaven help us) “social relevance.”  Steely Dan’s music has the wide and lasting appeal it does precisely because it is not like that.  Fagen and Becker are not the kids organizing protests.  They are the kids in the back of the classroom making smart-ass remarks about the other kids, including the ones organizing the protests.


The unsentimental edge to the overall product came from Becker.  Fagen’s first two solo albums, while they certainly exhibit the humor and observational acumen of a Steely Dan record, also manifest an optimism (even if a disappointed optimism) that you don’t hear in the Dan oeuvre.  By contrast, the edge remained, for the most part, in Becker’s first solo disc 11 Tracks of Whack.


In his statement on Becker’s death, Fagen noted that:


Walter had a very rough childhood – I’ll spare you the details… He was cynical about human nature, including his own, and hysterically funny.  Like a lot of kids from fractured families, he had the knack of creative mimicry, reading people’s hidden psychology and transforming what he saw into bubbly, incisive art.


End quote.  During the recording of Gaucho, Becker was hit by a car and seriously injured.  His girlfriend also died of a drug overdose at the time.  That suffering would come through in Becker’s music is not surprising.  What is noteworthy, and admirable, is the degree to which it was expressed with humor rather than bitterness.


Even the most jaded human being loses his cynicism when it comes to his children, and Becker was no exception, as Kyle Smith observes in his piece on Becker at National Review.  This paternal softness comes through even in a couple of the songs on 11 Tracks.  Nor was Becker’s pessimism ever total in the first place.  Smith quotes him as saying: “Perhaps being fatalistic about things or being cynical about them in a way expresses the deepest kind of optimism: that you’re still disappointed that things are the way they are.”  But then, a complete cynic couldn’t be as funny, or as devoted to the highest standards of musicianship, as Becker and Fagen were.