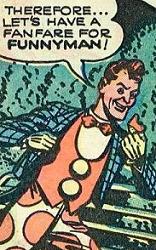 Just for laughs, one more brief post on the philosophy of humor.  (Two recent previous posts on the subject can be found here and here.)  Let’s talk about the relationship between rationality and our capacity to find things amusing.


First, an important technicality.  (And not exactly a funny one, but what are you gonna do?)   Recall the distinction within Scholastic metaphysics between the essence of a thing and its properties or “proper accidents” (where the terms “essence” and “property” are used by Scholastics in a way that is very different from the way contemporary analytic metaphysicians use them).  A property or collection of properties of a thing is not to be confused with the thing’s essence or even any part of its essence.  Rather, properties flow or follow from a thing’s essence.  For example, being four-legged is not the essence of a cat or even part of its essence, but it does follow from that essence and is thus a property of cats; yellowness and malleability are not the essence or even part of the essence of gold, but they flow from that essence and are thus properties of gold; and so forth.  A property is a kind of consequence or byproduct of a thing’s essence, which is why it can easily be confused with a thing’s essence or with part of that essence.  But because it is not in fact the same as the essence, it can sometimes fail to manifest if the manifestation is somehow blocked, as injury or genetic defect might result in some particular cat’s having fewer than four legs.  (See pp. 230-35 of Scholastic Metaphysics for more detailed discussion.)

Now, a stock Scholastic example of a property or proper accident is risibility or the capacity for laughter, which is a property of human beings insofar as it flows from rational animality, which is our essence.  (Note that the capacity in question here is not merely the capacity to make a certain laughter-like noise, as a hyena might.  Rather, it is the capacity to react with that noise to something regarded as funny.)


Suppose we accept this standard Scholastic view (which is expressed by thinkers like Aquinas).  It naturally raises the question of why risibility follows upon rationality.  What exactly is the connection between them?


Here it seems to me that the incongruity theory of humor has an advantage over its rivals, additional to the other advantages which (as I indicted in the earlier posts) I think speak in its favor.  The basic idea of the incongruity theory, you’ll recall, is that we find something funny when we detect in it some kind of anomalous juxtaposition or combination of incompatible elements (though as I’ve also noted, this idea requires various qualifications).


Now, notice that, in order to detect such an incongruity, you need to be able to grasp concepts.  For example, to see the humor in something like (to take a pretty random example) the “Gandhi II” sequence in the otherwise forgettable “Weird Al” Yankovic movie UHF, you have to grasp the concept of nonviolence, its association with Gandhi, the concept of an action movie, the concept of a movie sequel, etc., and the anomalousness of these being combined in just the way they are in that sequence.  But the grasp of concepts is the core of distinctively intellectual or rational capacities.  (See this article, reprinted here.)  So, the incongruity theory explains the link between rationality and risibility.


Other theories of humor arguably fail in this regard.  For example, the release theory of humor holds that finding something funny involves the release of tension or pent-up feelings.  But non-rational animals can experience a kind of tension -- think of a trapped horse panicking in the face of danger, or a frustrated dog trying to get to some food or to the mailman’s leg -- yet exhibit no risibility upon its release.


Or consider the play theory.  I suggested in one of the earlier posts that, rightly understood, the play theory should be regarded as an account of the psychological function humor plays in human life, rather than as an account of why we take things to be funny.  But suppose we interpreted it in the latter way -- as a claim to the effect that we find things funny when they afford some pleasure or relaxation.  One problem with such a proposal is that some animals exhibit playful behavior, but without exhibiting anything like a sense of humor about it.


It might seem that the superiority theory of humor can also account for the relationship between rationality and risibility.  It holds that finding something funny involves a feeling of superiority over and contempt for others.  And surely only a rational animal can feel superiority or contempt?


But there are a couple of problems with this suggestion. First, as some critics of the theory have pointed out, it isn’t clear that the laughter associated with contempt really involves finding anything funny.  Just as we can cry with sadness but also with joy, so too it seems that laughter can be associated with very different psychological states.


But even if there is some connection between the laughter involved with contempt and the finding of something to be funny, there is another problem with the suggestion that superiority is the key to our finding things funny (as opposed to something merely occasionally and contingently associated with finding something funny).  Or at least it is a problem if we accept certain other aspects of the Aristotelian-Thomistic conception of human nature.  Man is not only a risible animal, but also a social animal.  We are not atomistic individuals of the sort described by Hobbes (who was, as it happens, an advocate of the superiority theory of humor).  Our natural relationship to others is not one of seeking advantage, either via domination or contract.  But it seems that risibility considered as a manifestation of superiority or contempt could be a proper accident or property of human beings only if they did have this Hobbesian nature.  Hence the idea that risibility is a proper accident tells against the superiority theory.