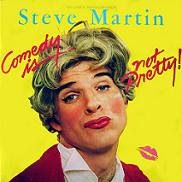 While we’re on the subject of Steve Martin, consider the following passage from his memoir Born Standing Up.  Martin recounts the insight that played a key role in his novel approach to doing stand-up comedy:


In a college psychology class, I had read a treatise on comedy explaining that a laugh was formed when the storyteller created tension, then, with the punch line, released it... With conventional joke telling, there's a moment when the comedian delivers the punch line, and the audience knows it's the punch line, and their response ranges from polite to uproarious.  What bothered me about this formula was the nature of the laugh it inspired, a vocal acknowledgment that a joke had been told, like automatic applause at the end of a song...

These notions stayed with me for months, until they formed an idea that revolutionized my comic direction: What if there were no punch lines?  What if there were no indicators?  What if I created tension and never released it?  What if I headed for a climax, but all I delivered was an anticlimax?  What would the audience do with all that tension?  Theoretically, it would have to come out sometime.  But if I kept denying them the formality of a punch line, the audience would eventually pick their own place to laugh, essentially out of desperation.  This type of laugh seemed stronger to me, as they would be laughing at something they chose, rather than being told exactly when to laugh.


To test my idea, at my next appearance at the Ice House, I went onstage and began: “I’d like to open up with sort of a ‘funny comedy bit.’ This has really been a big one for me... it's the one that put me where I am today.  I'm sure most of you will recognize the title when I mention it; it's the Nose on Microphone routine [pause for imagined applause].  And it's always funny, no matter how many times you see it.”


I leaned in and placed my nose on the mike for a few long seconds.  Then I stopped and took several bows, saying, “Thank you very much.”  “That's it?” they thought.  Yes, that was it. The laugh came not then, but only after they realized I had already moved on to the next bit. (pp. 111-12)


Well, this kind of thing either works for you or it doesn’t.  No doubt Martin’s facial expressions and body language helped make it work on the occasions when it did.  But Martin evidently thought his unorthodox approach to relieving comic tension might play well on the printed page too.  A good example comes from his 1979 book Cruel Shoes.  The piece is titled “Sex Crazed Love Goddesses” and here it is in its entirety:


Little Billy Jackson had to go to the store for his mother to pick up some postage stamps.  When he got there, he found the stamp machine to be out of order, and decided to walk the extra three blocks to the post office.  On the way there, he passed a hardware store, a variety store and a lamp shop.  The line was short at the post office and he got the stamps quickly and returned home.  His dog, “Spider,” bounded out to greet him as his mom waved from the porch.  Billy’s mother was pleased at the job he did and congratulated him on having enough sense to go to the post office when he found the stamp machine broken.  Billy had a nice dessert that night and went to bed. (p. 55)


I know what you’re thinking, but the story is actually better in the book, because it runs to the bottom of the page and it isn’t clear until you turn the page that that was it.


Well, again, this kind of thing either works for you or it doesn’t.  It got a laugh out of me but it probably helps that I’ve got a taste for the abstract and the absurd.  The joke will be either blindingly obvious to you or utterly opaque.  Either way, here it is: Even though you know it’s a gag piece in a Steve Martin book, the title “Sex Crazed Love Goddesses” cannot fail to raise in your mind the expectation that something salacious is to follow.  Hence as you read this utterly banal and irrelevant narrative about a kid buying stamps, etc., you feel sure that the story is going to shift gears at any moment.  Then it suddenly ends without having done so.  The comic “tension” Martin speaks of breaks precisely when it hits you that it’s never going to break, and that’s what gets the laugh.


In making a joke out of what we expect a joke to be or out of what we expect a story to be, Martin is doing something we might call meta-comedy.   Comedy itself and its conventions become the subject matter.  Notice how the “Nose on Microphone” bit can work only insofar as Martin gets his audience explicitly to think to themselves: “OK, here we all are watching a comedian, and we’re about to hear a really funny comedy bit.  Here it comes…”  That is the set-up of the joke, rather than something internal to the joke itself (“A priest and a rabbi walk into a bar…”), as we’d normally expect.  It is only when we become self-conscious about what we thought the joke would be and how it didn’t meet that expectation that the “payoff” can be delivered.  Normally we become “lost in” a joke, just as we become lost in the action of a movie or play and don’t constantly think to ourselves “These are actors, none of this really happened but they are trying to make it convincing” etc.  Martin’s joke works precisely by not letting us forget that “This is a stand-up comedian, and he is trying to make us laugh by telling us jokes,” like a movie or play that “breaks the fourth wall.”


Similarly, in the case of the Cruel Shoes piece, the joke can work only insofar as we are not lost in the story, but instead start thinking about the conventions of story titles and how they relate to the content of a story: “Why would a story with a title like ‘Sex Crazed Love Goddesses’ be about something as mundane as a kid buying stamps?  Oh wait, that mismatch is the joke…”


Martin’s act during his stand-up days relied on this kind of thing to a very great extent, even if not entirely.  A big part of his shtick required that the audience have it at the forefront of their minds that this guy is a famous comedian who is here to entertain us.  (Consider this bit and this bit from The Tonight Show, as well as various clips of stand-up material you can find on YouTube.)


Meta-comedy is essentially an instance of what, in a post from several years ago, I called “meta-art” -- art the theme of which is art itself, and the method of which involves a self-conscious stretching of art’s boundaries.  Martin was to stand-up comedy what Duchamp was to visual art, Schoenberg to classical music, and Ornette Coleman to jazz.  Meta-art, art gone self-conscious, is theory-driven in a way just-plain-old-art-without-the-“meta”-thank-you-very-much is not.  (It cannot be a coincidence that Martin was a philosophy major and has long been an art collector!)


This comparison of Martin’s stand-up comedy to other instances of meta-art prompts two reflections.  First, as I indicated in the post just linked to, while meta-art can be interesting, it can also be arid and repetitive and descend into self-parody.  Martin did not rely on meta-comedy entirely, and where he did the results do not always hold up well.  (Most of Cruel Shoes does not hold up well.  I’m not sure how well some of it held up in 1979.)  As he makes clear in Born Standing Up (which is a very good book), Martin was burned out by the early 80s.  The following passage is telling:


The act was still rocking, but audience disruptions, whoops and shouts, sometimes killed the timing of bits, violating my premise that every moment mattered.  The days of the heckler comebacks were over.  The audiences were so large that if someone was calling or signaling to me, only I and their immediate seatmates could hear them.  My timing was jarred, yet if I had responded to the heckler, the rest of the audience wouldn't have known what I was talking about.  Today I realize that I misunderstood what my last year of stand-up was about.  I had become a party host, presiding not over timing and ideas but over a celebratory bash of my own making.  If I had understood what was happening, I might have been happier, but I didn't.  I still thought I was doing comedy. (p. 185)


Martin does not put it this way, but it’s as if the meta-comedy had, without his realizing it, gone meta-meta.  People no longer showed up to hear meta-comedy anymore, let alone comedy.  They showed up to see the guy who was famous for doing the meta-comedy.  This couldn’t last, and Martin wisely made a transition into movies -- and, with them, a more conventional brand of comedy.


A second thought, though, is that it is quite remarkable how popular Martin’s stand-up then was given its often esoteric and “meta” character.  Meta-art is typically characterized by its lack of mass appeal.  Indeed, as Born Standing Up recounts, Martin’s act was by no means an overnight success.  But eventually it caught on in a big way.  Why?


One reason, of course, is that, as I have said, Martin’s stand-up comedy was not all of the surreal Cruel Shoes type.  It was a departure from the usual thing, but not a total departure.  (Thelonious Monk perhaps provides a better jazz analogy for Martin’s stand-up than Ornette Coleman does -- I compared Monk and Coleman in another earlier post.)


A second reason is that the intentional absurdity of some meta-art, while a stumbling block to a popular audience in the case of visual arts, literature, and music, can have mass appeal in the case of meta-comedy because of its similarity to slapstick.  If you present the man on the street with Duchamp’s Fountain readymade as art or an Ornette Coleman piece as music, he will be offended by it.  But if you present it to him as comedy -- say, in a Three Stooges episode where the fellas are hired as musicians and start playing like Coleman, or try sculpture but produce only a urinal -- then he’ll probably love it.  Meta-comedy is just the next step.  “Sure it’s absurd, but then this is supposed to be comedy, so…” And Martin mixed old-fashioned slapstick in with his meta-comedy in any event (both onstage and via movies like The Jerk).  To a popular audience it all might have seemed more like Moe Howard than artistic modernism.


Finally, there is, possibly (especially in light of Martin’s “celebratory bash” remarks), what we might call the “Money for Nothing” factor.  Just as the average guy might both resent and admire the pop star for his ability to attract fame, wealth, and women with (so he assumes) little effort, so too might he be as drawn to, as annoyed by, a guy who acts goofy onstage for a couple of hours and gets tons of money for it.  The stand-up comic in a suit, chatting with Johnny Carson on TV, can have a sex appeal that the sullen and impoverished avant-garde painter or novelist does not.  Meta-comedy is not pretty, but boy its rewards are!