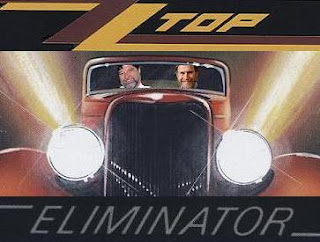 As an epilogue to my critique of Alex Rosenberg’s paper “Eliminativism without Tears,” let’s take a brief look at Rosenberg’s recent interview at 3:AM Magazine.  The interviewer styles Rosenberg “the mad dog naturalist.”  So perhaps in his bid to popularize eliminative materialism, Rosenberg could put out a “Weird Al” style parody of the old Noël Coward song.  Or maybe he and fellow eliminativist Paul Churchland could do a re-make of ZZ Top’s classic Eliminator album.  Don’t know if they’re sharp-dressed men, but they’ve got the beards.  (I can see the video now: The guys, electric guitars swaying in unison and perhaps assisted by Pat Churchland in a big 80s hairdo, set straight some benighted young grad student who still thinks the propositional attitudes are worth salvaging.  Romance ensues, as does a job at a Leiter-ranked philosophy department…)

Two passages in the interview call for special notice.  The interviewer notes that “in the rather heated response to Jerry Fodor’s provocations about natural selection your response was one of the few that recognized that he was onto something.”  Rosenberg replies:


When Fodor argued that natural selection can’t see properties, and can’t produce organic systems, for example brains—that respond to, represent, register properties, he thought he was providing a reduction [sic] ad absurdum of Darwinian theory… I believe that Fodor’s attempted reductio of Darwinian theory is a modus tollens of representationalist theories of the mind, theories that accord to the wet stuff, to neural states what Searle calls original intentionality. It’s an argument for eliminativism about intentional content.  So Fodor is totally wrong abut [sic] Darwinian theory, but his argument shows that we Darwinians (and all the physicists if I am right that Darwin’s theory is just the 2d law in action among the macromolecules) have to go eliminativist about the brain.


End quote.  See “Eliminativism without Tears” for similar remarks about Fodor.  This, my friends, is why Rosenberg gets paid the big money: to see more clearly than either his fellow naturalists or most theists what is really at stake.  Naturalists (such as many of Thomas Nagel’s critics) and ID theorists alike are endlessly farting around with questions about the probability of this or that biological phenomenon having arisen through natural selection, and other such relative trivia.  In the dispute over Darwinian naturalism, that is a side show at best.  The serious questions are not empirical but metaphysical, matters of what is possible even in principle rather than of probability.  It is not what can be read off from the empirical results of science, but rather what has been read into them philosophically from the start, that is both the source of naturalism’s apparent strength and in reality its Achilles’ heel.  And that is the dogmatic insistence that the natural order is utterly devoid of any immanent, built-in, Aristotelian-style teleology, finality, or directedness toward an end.  It is the ancient Greek atomist view of the world as a kind of vast clockwork, of all observable phenomena as entirely explicable at least in principle in terms of aggregates of particles in motion or the like.


Once you grant that supposition, even for the sake of argument, then you have conceded the naturalist’s key move.  He will always be able to come up with some far-fetched but seemingly possible account of the origin of any empirical phenomenon in these terms, the only remaining question being whether there is direct empirical evidence that things actually happened as the account says they did.  And once you’ve conceded the general correctness of his method, the naturalist will think even the most far-fetched and empirically unsupported specific applications of that method are more plausible than any alternative, on grounds of the general success of the method coupled with Ockham’s razor.  The alternatives will always seem ad hoc, god-of-the-gaps exceptions to the rule, destined to be superseded and thus not worth bothering with in the first place.  That is what the ID theorist fails to see.


Once you grant the supposition, though, you have also implicitly committed yourself to a radical eliminativism.  If there is no such thing as teleology, finality, directedness, one thing “pointing to” another, etc. in the natural world in general, then there can be no such thing in the biological realm specifically or in the human realm even more specifically.  That means that the Darwinian naturalist has no business helping himself to notions like “function,” “selection for,” and the like.  These are irreducibly teleological.  Of course, many naturalists suppose that such notions can be reduced to non-teleological ones, but as Fodor argued, they cannot be.  All attempts to reduce them face intractable indeterminacy problems.  The naturalist also has no business helping himself to notions like “thinking,” “willing” (freely or otherwise), “meaning” (whether the meaning of thoughts, sentences, or anything else), etc.  All such notions also smack of “directedness” toward an object, so that intentionality must be as illusory as the naturalist says teleology is.  And all attempts to reduce rather than eliminate intentionality also face intractable indeterminacy problems, as Rosenberg notes.  Eliminativism is forced on you if you consistently deny teleology.  This is what most naturalists fail to see.


That leaves the naturalist with two choices.  He can bring teleology back into the picture, which is what Nagel does -- essentially a journey “from Aristotle to Darwin and back again,” as Etienne Gilson prophetically put it.  Or he can bite the eliminativist bullet, which is what Rosenberg commends.  The trouble with that is that it cannot coherently be done.  Since science is as laden with intentionality as anything else, you will have to eliminate the very science in the name of which you are carrying out the elimination; and since philosophy (including eliminative materialist philosophy) is also as laden with intentionality as anything else, you will also have to eliminate eliminativism.  Eliminativism is a snake that eats its own tail.  The problem can be danced around, but it cannot be solved, for the reasons set out both in my recent posts on Rosenberg’s essay and in my series of posts on his book.


Not that the dummies who hang out in comboxes like Jerry Coyne’s or Jason Rosenhouse’s understand the gravity of the problem intentionality poses for their position, and thus the motivation for Rosenberg’s extreme solution.  This brings us to a second passage from the Rosenberg interview:


What is clear to me about the reception of The Atheist’s Guide was first how hard it is to get nonphilosphers to understand the problem of intentionality and aboutness, second how much harder to understand the eliminativist solution to the problem, and most all, the degree to which our emotional attachment to narratives—stories with plots, good guys, bad guys, agents with motives—gets in the way of our understanding science and applying it to these persistent questions.


Now I know how Berkeley must have felt when Dr. Johnson refuted him by kicking a stone, especially when I read the puerile self-refutation arguments against my eliminativism.


Of course a few theists have identified The Atheist’s Guide to Reality as correctly identifying the implications of demonic materialistic naturalism. But I am actually surprised by how few have done so. It’s no tribute to the intelligence of the rest of them.


And of course naturalists have pretty much ignored the arguments for the same reason. It gives naturalism a bad name with the public, whom they hope to win over to a humane and civilized point of view. I wish they had been able to succeed in reconciling science and the manifest image. Maybe they yet will. I doubt it.


End quote.  Note that, as we saw in our look at “Eliminativism without Tears,” Rosenberg is well aware that not all versions of the “self-refutation” objection are “puerile.”  Note also that if it’s “no tribute to the intelligence” of those theists who have failed to see the radical implications of naturalism, it is hardly a tribute to the intelligence of most naturalists that they have also failed to see those implications.  And note that if “stories with plots, good guys, bad guys, agents with motives” and the like are all fictions -- as they have to be on an eliminativist view -- then of course stories about bigoted religious believers (the bad guys, agents with bad motives) retarding the advance of science (a story with a plot) and resisted by intellectually honest naturalists (the good guys, agents with good motives) are also all fictions.  That Rosenberg either doesn’t see or doesn’t want to advertise this implication hoists him with the same petard he directs toward his more slow and/or intellectually dishonest readers.


And then there’s this irony: The very scientism Rosenberg is pushing is, of course, what has made many of his naturalist readers too philosophically shallow to see the problems to which he is trying to call their attention.


It’s a comeuppance worthy of a ZZ Top video!