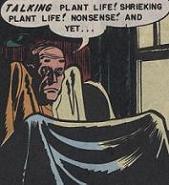 Gene Callahan responds to my recent criticisms of his view that plants are sentient.  (Some plants or all?  Gene seems to think all of them are, though the evidence he appeals to would show at most only that some of them are.)  Recall that I had noted three reasons Aristotelians deny that any plants possess conscious awareness.  The first is that plants lack the specialized sense organs we find in animals.  The second is that plants lack the variability of response to stimuli that animals possess.  And the third is that sensation together with appetite and locomotion form a natural package of capacities, so that since plants lack locomotion they must lack sentience as well.


Gene focuses on the issue of locomotion, and claims that plants can indeed move in something like the way animals do.  In response to the example I gave of dry grass, which cannot move away from sources of heat or seek out water in the way animals can, Gene writes:

Plants can and do do things about circumstances like these.  For instance, the rhododendrons in my yard, in extreme heat, curl up their leaves, lessening water loss.  Plants that undergo periodic dry spells develop deeper root systems than those that do not.

[I]t is simply empirically false that plants do not move towards or away from aspects of their environments. They merely do so at a much slower rate than do animals, so it is not readily apparent that they are doing so.  But it has been found that plants "recognize" others of their own species, actively work to drive off plants of other species, and respond to insect attacks with counter-attacks of their own.

"[F]linching" is about "moving away from bad conditions."  Plants do that.

The first thing to say in response to all of this is that to establish that something is capable of locomotion (which is what Aristotelians attribute to animals and deny to plants), it is not enough to show that there is some sense in which it “moves.”  Consider: A magnet will either push away from another magnet or draw toward it depending on which of the other magnet’s poles it is facing.  To take an example of “motion” in the broad Aristotelian sense of “change,” a pH test strip will change color when exposed to alkaline.  A wet kitchen sponge will return to its original size and shape after you squeeze it in your hand.  Or consider an instance cited by Bertrand Russell in his essay “Mind and Matter” of “the principle of the conditioned reflex, [which] though characteristic of what is living, finds some exemplification in other spheres.  For example: if you unroll a roll of paper, it will roll itself up again as soon as it can” (in Portraits from Memory and Other Essays, at p. 143).  And then there are examples of artifacts like smoke detectors and outdoor security lamps, which will activate in response to specific external stimuli.

Needless to say, none of these cases is plausibly regarded as involving sentience even though they all involve movement or change of some sort in response to the environment.  And this is so even though in some cases the response is vaguely analogous to the activity of living things -- specifically, to smelling or seeing (in the case of the smoke detector and security lamp), to self-preservation (in the case of the sponge), and to learned behavior (in the case of the rolled up paper).  So, to the extent that the plant movements cited by Gene are comparable to these, they cannot by themselves be indicative of sentience.

Of course, plants are, unlike these phenomena, alive.  And part of what it is, from an Aristotelian point of view, to be alive is to be the sort of thing that is the source of its own motions or changes.  (More precisely, it is to be the sort of thing that exhibits immanent as opposed to merely transeunt causation.  I have discussed this distinction in some previous posts, such as this one and this one.)  But precisely for this reason, mere motion isn’t enough for the locomotion that the Aristotelian tradition regards as characteristic of animals and absent in plants.  As Aristotelian-Thomistic philosopher David Oderberg defines it in his book Real Essentialism, locomotion is “the capacity and tendency for self-movement from place to place in fulfillment of appetition” (p. 184, emphasis added) and it is, he argues “locomotion of the whole organism that gives evidence of sentience, not a mere reflex in one or other part of an organism that is otherwise rooted to the spot” (p. 188, emphasis added).

Now one way to understand why sentience would be necessary to locomotion but not to other kinds of motion is as follows (where this is my way of stating things, not Oderberg’s, in case he would not want to commit himself to it!)  Because locomotion involves movement from one place to another, creatures capable of it need to be able to form inner representations of the objects and locations toward which they might move, representations that can guide that movement and that are variable enough to reflect alterations in the environment that arise as the creatures make their way from one place to another.  (For example, such representations need to be able to register the sudden appearance of a physical obstacle to further movement.)  Such creatures also need inner impulses that will cause them to initiate and sustain movement toward the objects of these representations, and those impulses also need to vary with alterations to the environment.  (For example, if a rival predator suddenly appears such a creature might have to shift from a desire to pursue a certain prey to a different impulse, either to fight or to flee.)  Now an animal’s ever-changing stream of conscious experiences performs exactly these functions; and that is, of course, precisely why animals have the complex nervous systems and sense organs they do.  Plants, by contrast, because they do not move from place to place, have no need of such inner representations and impulses and, unsurprisingly, lack anything like the neural and sensory structures that underlie such conscious awareness in animals.  Hence there is simply no reason to attribute sensation and appetite to them.

You might say that plants, unlike animals, need to be little more than stimulus-response mechanisms.  For that reason, behaviorism might be a good theory of plant psychology.  But of course, part of the point of behaviorism was that you don’t need to posit inner states in order to identify stimulus-response pairings -- which is why behaviorism is a lousy theory of animal and human psychology, i.e. the psychology of sentient creatures.

In another comment Gene replies to the point about the variability of response in sentient creatures, which is absent in plants.  In an exchange with Gene in the combox of my earlier post, reader Daniel Smith noted that “two identical plants would respond identically to the same stimulus.”  Gene responded:

Daniel, there is no such thing as “two identical plants”… Go out and look at a bunch of maple trees one day, and try to discover two of them that are identical.

But here Gene commits a fallacy of equivocation.  His response assumes that his critic’s point is that two plants that are “identical” in the sense of being perfect twins, each indiscernible from the other, would react to stimuli in the same way.  And as he rightly points out, there aren’t many plants that are identical to each other in that sense.  But that’s not the sense of “identical” in question here.  The point is rather that if you took two healthy plants of the same type and (say) two healthy dogs of the same type (whether you have “identical twins” in either case is irrelevant), you would never get out of the former the same variability of response to stimuli that you get out of the latter.  And this is evidence that you do not have in the former, as you do in the latter, inner sensory and appetitive states as intermediaries between the stimuli and the responses, the variability of which accounts for the variability of the responses.

And let's remember that fungii, which are vastly different to plants, living in an entirely different manner, do not even have a category in A-T [i.e. Aristotelian-Thomistic philosophy]!

(Gene had also made a big deal in his original post of the purportedly problematic status of mushrooms (!) in Aristotelian metaphysics.)

Now this is, of course, completely irrelevant to whether plants are sentient.  But it also reflects a misunderstanding of what Aristotelians mean by “vegetative” life.  Just as the use of “species” and “genus” in logic and metaphysics does not correspond exactly to the way those terms are used in biology, so too does “vegetative” in Aristotelian philosophy not track in a one-to-one way the use of terms like “plant” in biological science or in ordinary language.  It is used as a technical metaphysical term for those forms of life which, whatever their classification in contemporary biology, have capacities like nutrition, growth, and reproduction while lacking capacities like sensation, appetite, locomotion, rationality, or volition.  And in that technical, metaphysical sense both Fungi and Plantae count as “vegetative” even if they differ in various other ways.  (See Oderberg for discussion of this issue.)

In a seemingly common move by modern Aristotelians, [Ed] first plays the “but he doesn't really understand what we are saying” card.

Well, if the move is common, that is for good reason, as I have shown time and again (e.g. here, here, here, here, and here -- and the diligent reader with too much time on his hands can no doubt find many other examples in the blog archives -- not to mention here and here).  And in his latest remarks Gene only provides a further instance of the phenomenon insofar as (with all due respect to Gene) his arguments rest on a misunderstanding of what Aristotelians mean by “vegetative” and “locomotion.”