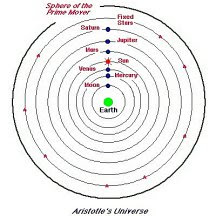 In several recent posts I have had reason to refer to a key difference between Aristotle and Aquinas: Aquinas holds that though final causes are immanent to the natural order, their existence nevertheless requires an explanation in terms of God’s directing things towards their natural ends. Aristotle, by contrast, takes the existence of final causes to be a basic feature of reality which requires no divine explanation. To be sure, Aristotle, like Aquinas, is a theist; in particular, like Aquinas he holds that there could be no change or motion at all unless there were a divine Unmoved Mover. But he does not think final causes per se provide a second route to God. There is in Aristotle a precursor to the First Way, but no precursor to the Fifth Way.

None of this is terribly controversial; it is standard stuff in Aristotle scholarship. Still, a couple of folks in the comboxes seem to be puzzled about it, so it might be worthwhile briefly to review Aristotle’s position.
The background to Aristotle’s view as developed in the Physics is a critique of the theories of atomists like Leucippus and Democritus, who favored a materialist explanation of the world which eschews final causes altogether, and the view of Anaxagoras that the order of the world requires an explanation in terms of a divine intelligence. Aristotle’s view is the middle ground position that there is such a thing as goal-directedness in nature, but that it is entirely immanent to the natural order: “That which is by nature and natural is never disordered. For nature is everywhere a cause of order.” (Physics 252a11-12, as translated by Monte Ransome Johnson in his book Aristotle on Teleology) For Aristotle, to be “natural” is ipso facto to be ordered in the sense of having an end toward which one is directed. That which requires an outside source to order or direct it toward an end would, for him, by that very fact not be a natural object at all but an artifact.
Book II of the Physics contains an extended defense of his position, and Aristotle responds to those who claim that goal-directedness or purpose requires conscious deliberation or planning of the sort we rational beings engage in:
It is ridiculous for people to deny that there is purpose if they cannot see the agent of change doing any planning. After all, skill does not make plans. If ship-building were intrinsic to wood, then wood would naturally produce the same results that ship-building does. If skill is purposive, then, so is nature. (Physics 199b26-31, Waterfield translation)
What he is saying here is that the fact that goal-directedness does not require conscious deliberation is evident from the fact that a skilled craftsman can carry out his work without even thinking about it – “on autopilot” as we might put it today, or without first ”making plans,” as Aristotle puts it. If this is possible for someone with such skill, there is in Aristotle’s view no reason not to think it also possible for natural objects. This is the force of the ship-building example: If there were something in the very nature of wood that “directed it” toward the end of becoming a ship, then what in the case of human craftsmanship results from deliberate design – a ship – would in that case result “naturally” instead, i.e. without conscious deliberation at all, as an oak derives from an acorn without the acorn planning this result.
Of course, as it stands this particular argument is open to the objection that even the skilled craftsman must at some point have consciously and deliberately learned his trade, which is not true of natural objects. And Aristotle does indeed have other arguments for the reality of final causes in nature. The point is just that the passage in question illustrates that Aristotle was concerned to deny that purpose or goal-directedness must necessarily be associated with conscious deliberation. And throughout the discussion in Book II of the Physics, Aristotle is keen to emphasize how purposes clearly exist in nature apart from deliberation, as they do in the behavior of spiders, ants, and the like (Physics 199a20-21) and in plants (Physics 199b9).
Now it does not in fact follow from the considerations that Aristotle adduces that a divine ordering intelligence is not necessary in order to explain the existence of final causes. As I noted in an earlier post, between Aristotle’s position and the (William Paley-like) view represented by Anaxagoras, there is a middle position represented by Aquinas’s Fifth Way, according to which purposes are indeed immanent in the way Aristotle says they are (rather than extrinsic a la Paley), but still ultimately need to be explained by reference to God’s ordering of things to their ends. Aristotle was, in Aquinas’s view and mine, just wrong to think otherwise.
There can, in any event, be no doubt that he did think otherwise. As he says in the Eudemian Ethics: “The divine is not an ordering ruler, since he needs nothing, but rather is that for the sake of which wisdom gives orders” (1249b13-15, as translated by Ransome Johnson). And far from having, as ideas in his intellect, the ends towards which the things of the mundane realm are directed by nature – as Aquinas holds that God does – the Unmoved Mover famously has in Aristotle’s view only himself as a proper object of thought (Metaphysics 1074b33-34).
That is not to say that final causality plays no role at all in Aristotle’s account of God’s relationship to the world. For he also famously holds that the way the Unmoved Mover moves the world is as a final cause, as the perfect end toward which things are naturally directed. And as the quotation from the Eudemian Ethics indicates, wisdom itself directs us toward the Unmoved Mover, the “service and contemplation” of whom is in Aristotle’s view the highest end of human existence (Eudemian Ethics 1249b21). But this is perfectly consistent with his view that final causes themselves are just part of the natural order, not put into things by God. “The Unmoved Mover is the final cause of things” does not entail “The Unmoved Mover orders things toward their final causes.” Rather, the fact that all things have the Unmoved Mover as their ultimate end is, for Aristotle, itself just a basic feature of reality – and something the Unmoved Mover himself, as Aristotle conceives of him, is too lofty to give any thought to.