On the death of Pope Benedict XVI 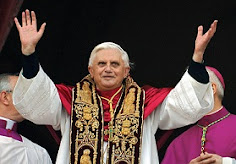 I’m not sure when I first became aware of Cardinal Joseph Ratzinger, who was later to become Pope Benedict XVI.  During my high school years in the early 80s, I had only a vague awareness of the doctrinal controversies roiling the Church.  I then knew little more than that they had something to do with liberal theologians and their opposition to Pope John Paul II.  My first clear memory of Ratzinger himself is from the very end of that decade, when I had left the Church and was on my way to becoming an atheist.  I read a magazine article about him and his work as the pope’s chief doctrinal officer.  The impression it left me with was of a man of deep learning and gravitas.  For some reason, what stood out especially was a remark of his quoted in the article, to the effect that a sound theology “cannot… act as if the history of thought only seriously began with Kant.”  (I later learned that this came from a lecture of his since reprinted as the third chapter of God’s Word: Scripture – Tradition – Office.)

There were, as this indicated, serious minds in the Church who affirmed the continuing validity of the premodern philosophical and theological worldview I was then questioning.  It would take more than a decade for me to see that they were right.  But when I did, Ratzinger proved a helpful guide.  His interview book Salt of the Earth was something I read when I began to consider coming back to the Catholic faith.  That and the earlier interview book The Ratzinger Report (which appeared in the middle of the 1980s but is still depressingly relevant) made clear what was going on in the Church.  They also made it clear that the pope had made a very wise decision in naming Ratzinger the Prefect of the Congregation for the Doctrine of the Faith.  On the one hand, he was highly intelligent and cultured, well-read in the modern ideas that informed contemporary hostility to Catholic teaching, and keen as far as possible to address them by way of rational persuasion.  On the other hand, he also had deep knowledge of and love for the tradition of the Church, and saw that the Church was nothing if she did not preserve and pass on that tradition whole and undefiled.

This combination of traits informed many of the policies and documents for which he was responsible as head of CDF and, later, as pope.  Donum Veritatis reaffirms in no uncertain terms the duty of Catholic theologians to teach in conformity with the tradition of the Church and the binding statements of the Magisterium.  At the same time, more than any previous official teaching document, it makes clear that there can be cases in which non-infallible magisterial acts can be deficient, and in which a faithful theologian can, accordingly, respectfully raise criticisms.  Given the ambiguities of several magisterial statements of recent years, the timing of Donum Veritatis seems providential.  In any event, and as I have discussed elsewhere, as head of CDF and as pope, Ratzinger was in reality the opposite of the “Panzer Cardinal” of self-serving liberal myth.  Disciplinary action was for him always a last resort, and mild even then.  His preferred approach was to engage even the Church’s harshest critics at the level of rational argumentation.

Again, though, fidelity to tradition was non-negotiable, and Ratzinger saw that only what he famously called a “hermeneutic of continuity” was consistent with the basic claims of Catholicism.  This hermeneutic even led him gently to criticize the direction the hierarchy had taken the Church in recent decades.  Though very much a man of Vatican II, he thought Gaudium et Spes too optimistic about the modern world.  He had reservations about Pope John Paul II’s interreligious prayer meeting in Assisi in 1986.  While condemning Archbishop Lefebvre’s disobedience in consecrating bishops without papal approval, Ratzinger acknowledged that those who followed Lefebvre had understandably been scandalized by the changes in the Church since the council.  He urged his fellow churchmen to take the concerns of traditionalists seriously:

[I]t is a duty for us to examine ourselves, as to what errors we have made, and which ones we are making even now…

[S]chisms can take place only when certain truths and certain values of the Christian faith are no longer lived and loved within the Church… It will not do to attribute everything to political motives, to nostalgia, or to cultural factors of minor importance…

For all these reasons, we ought to see this matter primarily as the occasion for an examination of conscience.  We should allow ourselves to ask fundamental questions, about the defects in the pastoral life of the Church, which are exposed by these events…

The Second Vatican Council has not been treated as a part of the entire living Tradition of the Church, but as an end of Tradition, a new start from zero.  The truth is that this particular council defined no dogma at all, and deliberately chose to remain on a modest level, as a merely pastoral council; and yet many treat it as though it had made itself into a sort of superdogma which takes away the importance of all the rest.

This idea is made stronger by things that are now happening.  That which previously was considered most holy – the form in which the liturgy was handed down – suddenly appears as the most forbidden of all things, the one thing that can safely be prohibited...

All this leads a great number of people to ask themselves if the Church of today is really the same as that of yesterday, or if they have changed it for something else without telling people.

His emphasis on combining fidelity to tradition and rational engagement with those who disagree continued after Ratzinger became Pope Benedict XVI, and is reflected in two of the great documents of his pontificate.  His homily of May 7, 2005 emphasizes that papal teaching authority exists for the sake of protecting the deposit of faith, rather than giving the man who happens to hold the office a means for implementing some personal theological agenda:

The Pope is not an absolute monarch whose thoughts and desires are law.  On the contrary: the Pope's ministry is a guarantee of obedience to Christ and to his Word.  He must not proclaim his own ideas, but rather constantly bind himself and the Church to obedience to God's Word, in the face of every attempt to adapt it or water it down, and every form of opportunism…

The Pope knows that in his important decisions, he is bound to the great community of faith of all times, to the binding interpretations that have developed throughout the Church's pilgrimage.  Thus, his power is not being above, but at the service of, the Word of God.  It is incumbent upon him to ensure that this Word continues to be present in its greatness and to resound in its purity, so that it is not torn to pieces by continuous changes in usage.

At the same time, in his famous 2006 Regensburg address, Benedict emphasized the centrality of reason to the Catholic faith and to the Christian conception of God, contrasting it sharply with the voluntarist tendency to see God as an unfathomable will who issues arbitrary commands.  He approvingly quotes Byzantine emperor Manuel II Palaeologus’s remark that “whoever would lead someone to faith needs the ability to speak well and to reason properly,” and endorses the emperor’s view that (as Benedict paraphrases Manuel) “not to act in accordance with reason is contrary to God’s nature.”  The pope added:

[T]he faith of the Church has always insisted that between God and us, between his eternal Creator Spirit and our created reason there exists a real analogy… God does not become more divine when we push him away from us in a sheer, impenetrable voluntarism; rather, the truly divine God is the God who has revealed himself as logos… Consequently, Christian worship is… worship in harmony with the eternal Word and with our reason.

Needless to say, all of this makes for a sharp contrast with recent years in the Church, which have seen policies and magisterial statements whose continuity with tradition has in some cases been unclear, and which are backed not by any attempt at rational persuasion but rather appeal to the raw power of ecclesiastical office.

Like so many others, I was elated when Ratzinger was elected pope.  And like so many others, I was crestfallen when he abdicated.  Such a move was so grave that I felt certain at the time that his death must be imminent.  For why would he shirk his paternal responsibilities, unless he feared incapacitation of a kind that would make him strictly incapable of fulfilling them?  Yet as the years passed and he remained intellectually active, it became clear that that was not in fact what was going on.  And that made his decision not only more baffling, but also more heartbreaking.  In his inaugural sermon, Benedict famously asked Catholics to pray for him, that he would “not flee for fear of the wolves.”  And yet it has come to seem to many that that is precisely what he ended up doing.

I have always stopped short of making that judgment myself, simply because I don’t know all the facts and don’t know his heart – and because I have long had a deep affection for the man that makes me want to think the best.  Still, in my view, the story of our times, both in the world and in the Church, is more than anything else a story of men failing to live up to their duties as fathers, providers, protectors – and of the catastrophic consequences that follow when they fail.  And like many others, I find it difficult to evade the conclusion that the state into which the Church has fallen over the last decade would have been avoided had Benedict remained our spiritual father until death.

But again, I do not know that it is fair to blame him.  Even if it is, great men can have great flaws and still remain great men.  And Benedict XVI was a great man, who did enormous good for the Church.  Let us give thanks for him, and pray for his eternal rest.