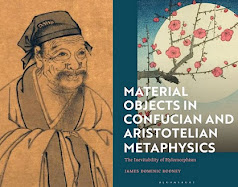 The Neo-Confucian Chinese philosopher Zhu Xi or Chu Hsi (1130-1200) famously posited two metaphysical principles often compared to Aristotle’s notions of form and matter.  James Dominic Rooney defends the interpretation of Zhu Xi as a hylemorphist in his new book Material Objects in Confucian and Aristotelian Metaphysics.  Into the bargain, he does so in conversation with contemporary analytic metaphysics and neo-Aristotelian philosophy.  It’s an excellent and important book.

What follows is a summary of some of the key ideas.  Zhu Xi’s fundamental notion is the distinction between li and qi.  Li can be translated as “pattern” or “structure.”  It is to be understood as that which gives something what Zhu Xi characterizes as its “nature,” and thus defines the “norm” for things of its kind.  Qi, by contrast, is that which receives said pattern or structure and thereby affords li an anchor in the concrete world.  Li thus has a kind of priority relative to qi.  For Zhu Xi, “li is one, the instances many,” and by itself is “without physical form.”  Qi, meanwhile, “is unrefined and has impurities.”  Li is the “reason” by which things are as they are, and thereby makes them intelligible.

Needless to say, from this much it is clear that li corresponds pretty closely to form, and qi to matter.  However, there is much more to be said, because the phrases quoted so far are compatible with either an Aristotelian or a Platonist reading of Zhu Xi.  To put the issue in terms familiar from contemporary analytic metaphysics, Rooney asks whether we should read Zhu Xi as offering a “constituent ontology” or a “relational ontology.”  For the Aristotelian, form and matter are each themselves parts or constituents of an individual physical object.  For the Platonist, by contrast, though individual physical objects are what they are by virtue of their relations to the Forms, the Forms themselves are not parts or constituents of the objects.  The question, then, is whether li is itself a part or constituent of a physical object, as form is for the Aristotelian, or is instead to be conceived of along the lines of a Platonic Form.

Rooney argues for reading Zhu Xi as a constituent ontologist, and thus in a manner that parallels Aristotelian hylemorphism. (Rooney himself prefers the spelling “hylomorphism.”  But nothing of substance rides on that, if you’ll pardon the pun.)

Here the exegesis of the relevant texts gets complicated, but Rooney marshals evidence for a hylemorphist reading, which includes the following.  Despite li’s priority, ultimately for Zhu Xi the li and qi of a thing exist together. “Under heaven there is no li without qi or no qi without li.”  He holds that “if there were no qi, then li would have no place in which to inhere.”  Zhu Xi also says things that imply that qi is purely potential in the absence of li, as prime matter is for Aristotelians like Aquinas.

A complicating factor here is that “li” is used ambiguously, and has both a general sense and a particular sense.  Rooney argues that it is sometimes used with reference to the “material nature” of a particular individual physical object, and sometimes instead with reference to the “fundamental nature” shared by all things.  In the former sense, he holds, it is comparable to the Aristotelian notion of the substantial form of a thing of some specific natural kind, where this form is understood as a constituent of that thing.

Where li is instead understood in a more general way as the fundamental nature in which all things share, Rooney proposes that this can be interpreted as analogous to Aquinas’s notion that all things participate in God conceived of as their exemplar cause.  In this way, there is in Zhu Xi’s metaphysics not only an Aristotelian element, but also something comparable to the Neo-Platonic element that Aquinas grafts onto his own Aristotelianism.  However, though we arguably can interpret Zhu Xi’s “Heavenly Li” something analogous to Aquinas’s notion of God as subsistent being and source of all other reality, there is no attribution to it of intellect and will (as there is for Aquinas).

These are, again, just some general themes, and don’t convey the richness of Rooney’s discussion of the relevant classic texts and scholarly literature on them, not to mention his broader defense of hylemorphism and treatment of issues in contemporary analytic metaphysics.  This kind of high-level engagement of Western with non-Western traditions is much needed, and by carrying it out at book-length, Fr. Rooney has made a major contribution.

Confucius on our times