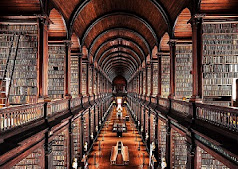 Jorge Luis Borges’ “The Library of Babel” (from his collection Labyrinths) famously describes an infinite library, comprising books which together represent every possible combination of characters in the alphabet in which they are written.  Most of the books are gibberish, just as, if you emptied a bag of Scrabble letters onto the floor and looked at the patterns that resulted, almost none of what you’d see would count as a genuine word or sentence.  But because every possible combination is there, many intelligible books are there too.  In fact, every possible such book is there, so that the library contains all knowledge, every truth there is about everything.  For any of these truths, though, the trick is to find it somewhere in this infinite, bewildering Babel.

That’s the idea, anyway, and Borges’ narrator’s description of the library, its history, and its denizens is arresting.  But would such a library really contain all knowledge?  Yes and no.  Unusual as the library is, it is nevertheless made up of books, more or less as we know them – that is to say, physical objects with marks whose semantic meaning is a matter of linguistic convention.  And as I have discussed many times over the years in various books, articles, and here at the blog, systems of material representations (words, pictures, or what have you) are, considered just by themselves, inherently indeterminate, inexact, or ambiguous in their content.  Given their physical properties alone, there is no fact of the matter about exactly what meaning they convey.

The indeterminacy of the physical

This is a truth acknowledged by philosophers of widely divergent commitments, from W. V. Quine to James F. Ross, and the conclusions they draw from it are no less divergent.  I follow Ross in holding that, since we have thoughts which do have determinate, exact, or unambiguous content, the lesson we should draw is that thought cannot be identified with any system of material representations.  For example, it cannot be identified with representations encoded in brain activity, in the electrical circuitry of a computer, or the like.  (I develop this line of argument in detail in my ACPQ article “Kripke, Ross, and the Immaterial Aspects of Thought” and have defended it against various objections here at the blog, for example in this post.)

Quine’s famous example involves a linguist trying to interpret a native speaker’s utterance of “Gavagai” in the presence of a rabbit, where the utterance is in some heretofore unknown language.  The linguist could translate it as “Lo, a rabbit!”, but might also produce translations that, instead of making reference to a rabbit, referred instead to either a temporal stage of a rabbit or an undetached rabbit part.  Which translation is to be preferred would depend on what beliefs the linguist thought he should attribute to the native speaker.  Does the speaker and the community he comes from fundamentally conceive of the world in terms of persisting substances?  In that case, the first translation would be preferable.  Or do they conceive of it instead in terms of ephemeral events?  In that case, the translation that made reference to a “temporal stage of a rabbit,” however odd to our ears, would be the one to go with.  And so on.

Deciding between the options would require appeal to other utterances of the speaker, along with the speaker’s behavior in general and the physical surroundings in which the conversation takes place.  But these other utterances, and the behavior as well, are also all susceptible of various alternative interpretations.  Suppose that the linguist is able to put together three different manuals of translation of the native speaker’s language, all of which are equally useful in allowing him to communicate with the speaker, but none of which is consistent with the others (since, for example, they translate “gavagai” in the three different ways described).  Then, Quine says, if behavior, facts about physical surroundings, and the like are all we have to go on, then there just is no fact of the matter about what the speaker really means.  The choice of which translation manual to use is a pragmatic matter.

Since Quine thinks that is all we have to go on, he draws the radical conclusion that there is indeed no fact of the matter about what the speaker means.  And since the scenario he describes differs only in degree from the situation we’re all in with respect to each other, he concludes that there is no fact of the matter about what any of us means either.  Other philosophers, judging (quite rightly in my view) that this position is incoherent, conclude instead that behavior, physical surroundings, and the like are not all that we have to go on.

Now, it turns out that if the rest of what we have to go on is just more in the way of physical facts, then that will not suffice to change the outcome of Quine’s argument in the least.  For example, as Saul Kripke showed, appealing to computer programs purportedly being implemented in the brain makes no difference at all, because exactly which program any machine (or the brain) is running is itself indeterminate from the physical facts alone.  Thus does Ross conclude that the semantic content of our utterances, and the conceptual content of our thoughts (which is the source of the content of our utterances) is not to be identified with any physical or material properties at all.  (Again, see the articles linked to above for detailed exposition of the argument, responses to various objections, and so on.)

Suppose that in some infinite corridor of Borges’ library, you can find this series written on a wall, extending forever in both directions.  Wouldn’t that unambiguously represent the series of integers?  Given our conventions, sure it would.  But given only the physical properties of the representations, it would not.  For the physical properties do not themselves have any inherent connection to the numbers represented.  There is, for example, no inherent connection between “4” and the number 4, any more than there is an inherent connection between “IV” and the number 4 or between “IIII” and the number 4.  That they are related is merely a matter of our conventions.  Suppose that “4” instead stood for cheeseburger, that “7” stood for carburetor, that “18” stood for collapse of the wave function, that “47” stood for Stan Lee’s sunglasses, and so on.  Then the infinite series written on the corridor walls would not represent the integers, but rather some bizarre sequence of disconnected concepts.

This is in fact why most of the books in Borges’ library would be gibberish.  Linguistic representation involves layers of conventions.  For example, there is in English the convention by which “a,” “b,” “c,” etc. count as letters.  But there is the further convention by which the sequences of letters “dog” and “cat” count as words.  There is, by contrast, no convention by which “rbxzt” or “ZZggTT” counts as a word.  So, putting limits on what counts as a letter only goes so far in excluding meaningless marks.  In English, the conventions will allow in “a,” “b,” “c,” etc. but not, say, “ȸ” or “Ж.”  But “a,” “b,” “c,” etc. will still yield meaningless combinations of marks.  Languages are in this way inefficient, allowing for the possibility of enormous amounts of nonsense unless some special conventions exclude it, but where (given the indeterminacy of the physical) there is no way to exclude all of it.

Could there be a system of representations that contains no gibberish?  And, for that matter, no indeterminacy of meaning?  Yes, but it would have to comprise what the Scholastic philosopher John Poinsot (also known as John of St. Thomas) called “formal signs,” which are signs that are nothing but signs.  To explain the idea by way of contrast, consider again the written word “dog.”  This is a sign that is more than a sign.  It is, in particular, a sequence of physical shapes and on top of that it is a representation of dogs.  A formal sign that represented dogs would be one that has no such double nature.  It would be a representation of dogs and nothing more than that – it would not, for example, also be a sequence of shapes, or of noises, or the like.  Concepts, according to Scholastics like Poinsot, are formal signs in this sense.  (For a bit more on this notion, see pp. 27-28 of “Kripke, Ross, and the Immaterial Aspects of Thought,” linked to above.)

Hence, a system of representations containing no gibberish or indeterminacy of meaning would not be Borges’ library which, qua library, comprises material representations (books, written words, etc.).  Borges’ library could contain all possible knowledge only if there is something distinct from the library, by reference to which (some of) the linguistic marks contained in the books by convention count as representations of all possible knowledge.  Borges’ narrator recognizes that the library by itself does not suffice to determine exactly what any book within it represents, saying:

An n number of possible languages use the same vocabulary; in some of them, the symbol library allows the correct definition a ubiquitous and lasting system of hexagonal galleries, but library is bread or pyramid or anything else, and these seven words which define it have another value. You who read me, are You sure of understanding my language? (p. 85 of the Penguin books edition)

Of course, the denizens of Borges’ library, who read and interpret the books, are distinct from the library itself, and they assign meanings to the linguistic representations contained therein.  But they are not the ultimate source of the information said to be contained in the library, and could not be, since in none of their minds (considered either individually or collectively) is all of that information to be found.  That’s precisely why Borges describes some of them as searching the library for books that would contain certain secrets they would like to know.  In some way, then, there must be something distinct not only from the library, but also from the minds of its inhabitants, that determines the meaning of the (subset of) representations contained in the books that count as all possible knowledge.  What would this be?

One possible answer is implied by mathematician and science fiction writer Rudy Rucker’s notion of the “Mindscape,” which I discussed in a post some years back.  The Mindscape is essentially the collection of all the possible concepts, propositions, and inferences that a mind might entertain, considered as something analogous to Plato’s realm of the Forms.  But as the Neo-Platonic/Augustinian tradition argued – and as I argue too, in chapter 3 of Five Proofs of the Existence of God – ultimately we can make sense of the Platonic realm only if we understand it as comprising ideas in the divine intellect.  (Though as I explain in the post just linked to, Rucker’s Mindscape is not itself to be identified with the divine intellect, but rather as something that ultimately presupposes the divine intellect.)

Though Borges’ infinite library does not exist, something analogous to it – in particular, analogous to it in its being a repository of all knowledge – could exist, and indeed does exist, viz. the divine intellect.  But there is in it neither gibberish nor indeterminacy.

Kripke, Ross, and the Immaterial Aspects of Thought

Revisiting Ross on the immateriality of thought