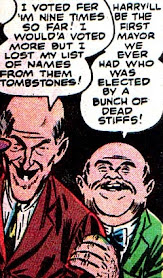 As longtime readers know, I have been very critical of conspiracy theories.  But it is important to be clear about exactly what one means when using the expression “conspiracy theory” in a dismissive way.  No one denies that there are conspiracies of some kinds – they happen every time two or more criminals work together to rob a liquor store, plan a murder, embezzle from their employer, or commit a terrorist act.  What are seriously problematic – and what I have criticized – are theories that posit conspiracies so vast that they implicitly subvert the epistemic foundations of the theory itself.  They are philosophically problematic in the way that other forms of radical skepticism and the “hermeneutics of suspicion” are.

Claims about election fraud significant enough to tip an election needn’t be like that.  They needn’t assert that “everyone is in on it.”  In fact, they don’t even need to posit a conspiracy at all – at least not one involving coordination between, or even mutual knowledge of, all those who were involved.

Let’s look at it from the point of view of the classic trio of means, motive, and opportunity.  Where all three are present, they don’t establish that a crime did in fact occur, but they do suffice to show that it could have occurred, so that it is reasonable to look for evidence that it did.  And I submit that all three are present in the current situation.

One of the problems with conspiracy theories of the crackpot type is that they posit crimes and collusion that are simply way too intricate to pull off.  For example, if your favorite JFK assassination conspiracy theory requires just the right people, in high places and low, spread across the CIA, the FBI, Army intelligence, the mafia, the Time-Life corporation, the anti-Castro Cuban community, Texas oilmen, nightclub owners, etc., doing just the right things at just the right times in just the right places from Dallas to New Orleans to Washington, D.C. – well, it simply strains credulity.  It simply could not have happened, given the way human nature and human society work.  The means are absent for such a vast conspiracy (unlike, say, a theory that requires just a few Mafiosi).

Now, is a voter fraud scenario that could tip a major election as implausible as that?  Not at all.  We know this, because we know that such fraud has in fact happened in the past, or at least plausibly has happened, as even sober mainstream observers agree.  For example, a strong case can be made that Al Franken’s victory over Norm Coleman in the 2008 Minnesota Senate race resulted from voter fraud.

To be sure, the margin in that case was very small – on the order of a few hundred votes.  However, fraud also plausibly took place in an election that involved much larger margins, namely the 1960 presidential election.  Kennedy won Illinois by about 8,800 votes, mostly owing to results in Mayor Richard Daley’s Chicago.  He won his running mate Lyndon Johnson’s home state of Texas by about 46,000 votes.  Had he lost both of those states, Nixon would have won the election.  And some mainstream historians and journalists, including liberal ones, think that these states were indeed stolen from Nixon.  For example, Kennedy biographer Seymour Hersh judges that the election was stolen.  Historian Robert Dallek thinks that at least Illinois was stolen, via Daley’s political machine.  Historian William Rorabaugh thinks that Nixon may have been cheated out of as many as 100,000 to 200,000 votes in Johnson’s corrupt Texas.

Whether the 1960 election really was stolen is a matter of controversy, but the point is that mainstream historians agree that it could have happened.  The scenario does not require the kind of conspiracy theory that can be ruled out a priori as impossible.  And it should be noted that it does not necessarily require a centralized conspiracy coordinating efforts across state lines.  The Democratic political machines in Chicago and Texas could act completely independently, each having an interest in doing what they could to make the national election come out in the Kennedy/Johnson ticket’s favor.

Now, the states in dispute in the current election involve similar vote margins – around 11,000 votes in Arizona, 14,000 in Georgia, 20,000 in Wisconsin, 37,000 in Nevada, and 54,000 in Pennsylvania.  Even the 146,000 vote difference in Michigan is comparable to what might have been stolen from Nixon in Texas.  You’d just need there to be enough corrupt like-minded Democratic operatives in these different states to do the kinds of things that Democratic operatives in 1960 may well have done in Chicago and Texas.  And again, they needn’t have been coordinating their efforts.  You’d just need enough people in each state independently judging that voter fraud was a good way to get their favored candidate to win.

Do the mechanics of elections make such fraud less likely now than in 1960?  That’s far from obvious.  Some of the key cities, such as Philadelphia, are notorious today for political corruption, just like Daley’s Chicago was.  There are also new methods of voter fraud made possible by modern voting machines and software – as mainstream outlets were warning back when they feared that Russia might steal the 2016 election for Trump.

The bottom line is that fraud on a scale that could tip the election Biden’s way could plausibly have happened.  The idea cannot reasonably be dismissed out of hand as a “conspiracy theory.”  And again, left-wingers who take seriously the idea that the 2016 election was stolen for Trump are the very last people who have any business dismissing it.

This one’s easy.  Consider a super-“woke” Democratic operative who is convinced that Trump stole the 2016 election with Russian assistance, and remains a Russian asset.  Suppose he also believes that Trump and his supporters are vile fascists, racists, sexists, and homophobes, and existential threats to racial minorities, LGBT, women, and the Left.  He believes that “systemic racism” thoroughly permeates U.S. institutions in the interests of upholding “white supremacy,” and that Trump’s defeat is crucial to defeating these evil forces.  He believes that the rioting, looting, and burning perpetrated by Antifa and BLM activists is justifiable or at least excusable, despite the suffering it inflicted on innocent business owners.  (No omelets without broken eggs, and all that.)  He believes that institutions like the police are so thoroughly corrupt that they must simply be “defunded,” regardless of the harm this will do to neighborhoods no longer protected from criminals.  (Again, omelets, broken eggs.)  He thinks court-packing and other schemes that would destroy American democratic precedent and secure one-party rule are fine and dandy.  He has such an expansive conception of “violence” that he seriously believes that politically incorrect language and other “micro-aggressions” make others “unsafe.”

Might such a person draw the conclusion that voter fraud to secure a Trump defeat is justifiable – perhaps even a kind of self-defense, indeed, maybe even one’s duty as a “progressive”?  To ask the question is to answer it.

Are there enough people like this to perpetrate the amount of fraud necessary to alter the outcome of the election?  Well, there are certainly a helluva lot more of them now than there were in 1960.  Do the math.

So, the means, motive, and opportunity for voter fraud significant enough to tip an election are at least as present now as in 1960, and arguably more so.  Again, that doesn’t by itself show that such fraud has actually occurred, but it does make it reasonable to investigate the matter.  Those currently insisting on doing so before declaring a winner are not only within their legal rights, they are within their epistemic rights.