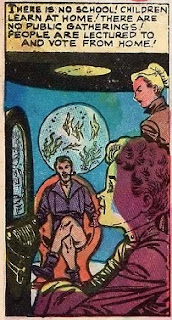 As I have said before, I think that the lockdown that was put in place in the United States two months ago was morally justifiable given the circumstances at the time.  In my opinion, under current circumstances, it is no longer morally justifiable.  To be sure, I am not denying that some social distancing measures are still justifiable and even necessary.  I am also not denying that a more modest lockdown may still be defensible in some localities.  But the draconian total lockdown that was put in place across most of the country is at this point no longer defensible, and state and local authorities who are relaxing it are right to do so.


The natural right to earn a living

The basic natural law grounds for this judgment are straightforward.  Breadwinners have a natural right to labor in order to provide for themselves and their families.  Hence, governing authorities may not prevent them from doing so unless strictly necessary for preserving the common good.  Now, a strong case could be made at the beginning of the lockdown that preventing such labor was indeed strictly necessary.  But such a case cannot be made now.  Hence, while a total lockdown was justifiable at the beginning, it is no longer justifiable, and governing authorities have a strict duty in justice to relax it.  The details of how this might be done in this or that locality are debatable, but the general principle is clear.

One reason this is not more widely recognized is because of the seriously misleading way in which the issue is routinely framed, viz. as a matter of balancing “the economy” against “saving lives.”  First of all, what is in jeopardy is not some abstraction called “the economy.”  What is in jeopardy is the basic natural human right to earn a living.  To talk about how the lockdown affects “the economy” tends to disguise the true moral situation, because it makes it sound as if public authorities are merely tinkering with the operation of some impersonal mechanism.

What they are actually doing is preventing millions of human beings from exercising their fundamental right to support themselves and their families.  And the vast majority of them are people who live paycheck to paycheck and cannot afford to have their life savings depleted.  Chatter about the effects of the lockdown on “the economy” can give the false impression that government officials may decide what to do about the situation at their leisure.  Keeping in mind that what we are really talking about is interference with a basic human right reminds us of the situation’s true urgency.

There are important further considerations, such as the ill effects the lockdown is having on the education of children and on the psychological well-being of young and old alike.  By no means the least of the lockdown’s harms is its interference with the practice of religion, such as the deprivation of the sacraments in the case of Catholics.  All of these too are harms that follow from governmental actions that violate natural rights unless they are strictly necessary for protecting the common good.

Again, the response will be that such actions are necessary in order to “save lives.”  But talk of “saving lives,” when kept vague, is demagogic and papers over crucial moral distinctions.  “Saving lives” could mean:

(a) refraining from directly and intentionally causing people to die,

(b) refraining from acts that have a strong likelihood of resulting in unintended deaths, or

(c) refraining from acts that have only a remote chance of resulting in unintended deaths.

Now, everyone in the debate over the lockdown favors (a) and (b) and no one in the debate favors (c).  For example, no one believes that we have a general duty to avoid driving, or construction work, or going out of doors when one has the flu, or other common actions that have a remote chance of resulting in unintended deaths.  No one believes that public authorities have a right or duty to forbid such acts, even though doing so would “save lives.”  And everyone agrees that driving at 100 mph down residential streets, setting off fireworks near dry brush, going out of doors when one has the Ebola virus, and other acts that have a strong likelihood of resulting in unintended deaths ought to be forbidden by public authorities.

What people disagree about is simply whether certain acts forbidden under the lockdown (like operating a barbershop or a clothing store) more plausibly fall into category (b) rather than (c), especially when safety measures are taken (wearing masks, letting only a certain number of customers in at a time, etc.).  Even if a compelling case could be made for thinking that they fall into (b) rather than (c), it would be an outrageous calumny to accuse people who in good faith believe otherwise of being “murderers” or a “party of death.”  Such inflammatory rhetoric evidences a lack of the objectivity and charity required to deal with the crisis and promote the common good.

But in fact there is no compelling case.  Certainly there is at least as strong a case to be made for the other side.  And that is sufficient reason to relax the lockdown, because it is those who do not want to relax it who have the burden of proof.

The original rationale for the lockdown was to “flatten the curve” so that hospitals would not be overwhelmed and crucial medical equipment such as ventilators would not become scarce.  Ordinary work like running a clothing store or cutting hair was said to be dangerous because in the aggregate such activities threatened to increase the number of Covid-19 infections to the point that the medical system could not deal with them, let alone all the other ailments that bring people to the hospital every day.

But that aim has for some time now been accomplished.  The curve has been flattened and, more to the point, hospitals are in general not in danger of being overwhelmed and ventilators are not scarce.  Not to relax the lockdown under such circumstances is prime facie unjust.  When politicians and pundits move the goalposts in order to maintain it anyway, it is not unreasonable for workers whose lives and livelihoods have been upended to complain that they’ve been sold a “bait and switch.”

The response will be that lifting the lockdown will result in an increase in deaths.  But once again, such a claim is too vague to prove anything.  After all, even if the novel coronavirus was annihilated tomorrow, lifting the lockdown would still result in an increase in deaths – from the traffic accidents, construction accidents, deaths from ordinary flu, etc. that would result just from people returning to ordinary life, with its ordinary risks.

What the lockdown defender needs to show is that the increase in deaths would be dramatic enough to override the strong presumption against interfering with the natural right to earn a living.  That’s a very tough burden to meet, and I submit that it has not been met.  What the original “flattening the curve” rationale had going for it is that an imminent and completely general breakdown in the medical system would clearly be contrary to the common good, which gave a plausible rationale for overriding the right to work.  But the alternative rationales being offered by the lockdown’s defenders are nowhere near as clear and compelling as that.

In particular, there is no compelling argument for preserving a total lockdown as a method of fighting the virus (as opposed to using it as a method to keep hospitals from being overwhelmed).  Total lockdowns of vast populations (as opposed to more limited quarantines) are not a time-tested way of dealing with pandemics, but a very recent novelty.  Not only is there is no evidence that they are more effective than less extreme measures, but there is now evidence that they are not more effective.  Some experts argue that the virus has likely already worked its way through the population anyway and is on its way out regardless of the lockdown.

It is also clear at this point that the virus is not equally dangerous to all.  It is primarily the elderly and those with certain medical conditions who are at risk, and they can be protected by way of more modest measures than a general lockdown.  Then there is the argument that while relaxing the lockdown might result in more deaths in the short run, it will yield relatively fewer deaths in the long run, since it will facilitate achieving herd immunity.  And there is the further consideration that the lockdown itself threatens lives insofar as ailments other than Covid-19 are not being treated as frequently or effectively, medical workers are being laid off, and so forth.

Yes, much of this is controversial.  But again, it isn’t those who favor relaxing the lockdown who have the burden of proof.  The burden is on those who want to preserve it.  Two months ago, they could make a strong case for having met it.  Not any longer.