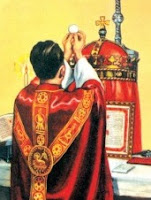 One of the key themes of the early modern philosophers’ revolt against Scholasticism was a move away from an Aristotelian hylemorphist conception of the nature of physical substance to some variation or other of the mechanical philosophy.  The other day I was asked a very interesting question: Can transubstantiation be formulated in terms of a mechanistic conception of physical substance rather than a hylemorphic one?  My answer was that I would not peremptorily say that it cannot be, but that the suggestion certainly raises serious philosophical and theological problems.

Now, the mechanical world picture that pushed aside the hylemorphist model tended radically to revise the common sense understanding of physical objects in one of two general ways, depending on how mechanism was spelled out.  It reduced ordinary physical objects either to mere aggregates of their innumerably many component parts, or to mere modes of some larger blob of which they were the parts.

Descartes and Spinoza essentially took the latter option.  Though Descartes is often described as positing a plurality of extended substances alongside the plurality of thinking substances, his considered view seemed to be that strictly speaking, there is only a single extended substance, of which the ordinary objects of our experience are merely modifications.  Spinoza more famously took such a position (or rather, he took it that Deus sive Natura was the one substance of which the ordinary physical objects of our experience are all modes).  On this view, a stone, a tree, and a dog are not really distinct substances, but merely distinct aspects of one and the same substance – in something like the way common sense regards the color, weight, and shape of a stone to be mere modes of one and the same object, the stone.

Atomist and corpuscularian versions of the mechanical philosophy went in the other direction.  They essentially make either atoms or corpuscles the true substances, and ordinary objects mere aggregates of these purported substances.  Just as a pile of rocks is not a true substance but merely a collection of substances (or as the hylemorphist would say, being a pile of rocks is a merely accidental form rather than a substantial form), so too a stone, a tree, or a dog is on this view merely a collection of particles.  In effect, the particles are the true substances, and the stone, tree, or dog is like the pile – a relatively superficial arrangement of metaphysically more fundamental entities.

So, to come to transubstantiation, the idea, of course, is that in the Eucharist, while the accidents of bread and wine remain, the substance of bread and wine are miraculously replaced with that of Christ.  Suppose, then, that we were to adopt Descartes’ version of the mechanical philosophy, on which there is just one big physical substance underlying all the things ordinary perceptual experience reveals to us.  That would entail that the substance that underlies the accidents of bread and wine that are about to be consecrated is the very same substance as that which underlies stones, trees, dogs, cats, human bodies, apples, oranges, the sun, the moon, water, lead, gold, and every other thing we see, hear, taste, touch, or smell.

But in that case, when transubstantiation occurs, it is not just the substance underlying the accidents of bread and wine that is replaced, but the substance underlying all of these other things too.  In other words, after transubstantiation occurs, it is really the body and blood of Christ that underlies what we perceive as stones, trees, dogs, cats, human bodies, the sun, the moon, water, etc.!  Everything in the physical world would be transubstantiated.  We would be left with a kind of pantheism.  Absolutely every physical thing would have to treated with the same reverence that the Eucharist is, because every physical thing would be the Eucharist!

Another bizarre implication of this is that transubstantiation could occur only once.  For only at the first time it occurs is the one physical substance replaced by that of Christ.  If a priest were ever to try to consecrate bread and wine again, he would fail, because there is no longer any physical substance there to be replaced.  It is already the body and blood of Christ.

Suppose we went the other route, that of either atomism or corpuscularianism.  Then, like stones, trees, and dogs, bread and wine would not be true substances but merely accidental collections of innumerably many true substances.  They would be like a pile of rocks, only instead it would be fundamental particles (atoms or corpuscles, depending on your favored version of the mechanical philosophy) that would be piled up.  But in that case, exactly what is the substance that is replaced when transubstantiation occurs?  Neither the substance of the bread nor that of the wine can be what is replaced, because on this view they just aren’t true substances in the first place.

Should we say that it is each particle that makes up the aggregate that is transubstantiated (just as Catholic theology allows that many hosts at a time may be consecrated at Mass)?   But there are several problems with that suggestion.  The first is that it is hard to know how to give a principled answer to the question what the boundaries are between those particles that make up the aggregate and those that are not part of it – and thus between those particles that are transubstantiated, and those that are not.  The reason is that the boundaries of an aggregate are much less well defined than those of a substance.  Is a stone that is two millimeters away from a pile of stones itself part of the pile or not?  And is a particle that falls from the host part of that (purported) aggregate of particles or not?

If we think of the host on the model of an Aristotelian substance, then we can say that a fallen particle is part of the host, like a body part that has been severed, as it were.  But, again, if instead we think in terms of the model of a pile of stones or some other aggregate, the answer isn’t as clear.

A second problem is that in Catholic theology, not any old matter can be used when consecrating the Eucharist.  It has to be bread and wine, specifically.  But on the interpretation under consideration, according to which bread and wine are not true substances, it is really the particles (either atoms or corpuscles) that are being consecrated.  And the atoms or corpuscles that make up bread and wine are essentially the same as those that make up everything else (just as the stones that make up a pile can be essentially of the same type as those that are used instead to make up a wall).  In that case, though, it would be hard to see why there is anything special about bread and wine.  Why couldn’t any old physical thing be consecrated, if every physical thing is essentially just the same kind of stuff in relatively superficial differences of configuration?

A third problem is that canon law says that a Catholic ought to receive communion at most only once (or in some special circumstances, perhaps twice) a day.  But on the interpretation under consideration, one would in effect be consuming millions of consecrated hosts insofar as each of the millions of particles that make up what common sense regards as a single host was being independently transubstantiated.

Perhaps such problems could be solved, though I am doubtful.  Anyway, the issue illustrates the unexpected implications that philosophical assumptions can have for theology.  (And thus the caution that any Catholic ought to exercise before embracing philosophical novelties.  The Scholastics knew what they were doing.)