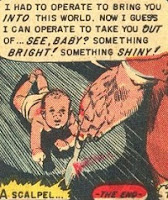 Yesterday at The Corner, Ramesh Ponnuru responded to a reader who criticizes opponents of abortion who express special outrage at late-term abortions.  If all direct abortion amounts to murder, the reader says, then it is only a cynical political tactic to speak of late-term abortions as if they were especially odious.  I more or less agree with Ponnuru’s reply to this (give it a read, it’s brief), but I would add a clarification and a qualification.

I know what Ponnuru means and I think this is true as far as it goes (with a serious qualification I’ll come to in a moment), but I think that he should put the point instead by saying that while the act of aborting an embryo and the act of aborting an eight-month-old fetus are, objectively speaking, equally bad, nevertheless a person’s subjective culpability can, in theory, plausibly be greater in the latter case than in the former.  And that is correct, for while it is obvious just from appearances that an eight-month-old fetus is a human being, it isn’t obvious just from appearances that an early-stage embryo is.  After all, even Aquinas, given his mistaken assumptions about the biology of embryonic development, thought that at the earliest stage of pregnancy a true human being did not yet exist, so that abortion at that stage wouldn’t count as homicide.  (He still disapproved of such abortions because they amounted to a kind of contraception.)

Here’s the qualification.  We’ve come a very long way from Aquinas in terms of our knowledge of embryonic development, and that knowledge is now widespread enough that while in theory someone could be less culpable for approving of aborting an early-stage fetus than for approving of a late-term abortion, the number of people who are in fact less culpable is in my view smaller than Ponnuru might suppose (though for all I know, Ponnuru might not think the number is actually any higher than I think it is).

Of course, it’s impossible to come up with a specific figure, but here’s the reason why I think the number of people who are not subjectively culpable is not likely to be large.  Suppose we classify pro-choicers into the following three groups:

(b) those who aren’t sure whether or not early-term abortions are as morally objectionable as late-term abortions, but who approve of keeping the former legal anyway despite not approving of the latter, and

I think Ponnuru would agree with me about that much.  (I’m aware that some readers will not agree, and that they would need argumentation in order to be convinced of what I say in the previous paragraph.  But this post is not about why we should object to late-term abortion, infanticide, etc.  It’s about what those who already do object to it, as Ponnuru and I do, should think about the subjective culpability of those who approve of early-term abortions but not late-term abortions.)

How many pro-choicers are in group (a)?  It’s hard to say.  Given recent events in Virginia and New York, it seems that a significant number of pro-choicers have moved into this group, but I have no idea what percentage of them that would be.

What matters for present purposes is group (b).  For I would suggest that that is very probably the group that the majority of pro-choicers fall into.  And I would also suggest that this group too is guilty of a “deep corruption of conscience,” of moral depravity and culpable self-deception.

Consider, after all, the kind of rhetoric that has been standard among pro-choice politicians for decades now.  Bill Clinton famously said that abortion should be “safe, legal, and rare.”  Barack Obama said that answering the question about when a fetus has the right to life is “above [his] pay grade.”  Mario Cuomo acknowledged that his conscience and Catholic faith required him to be “personally opposed” to abortion even though he was pro-choice.

Now, why would Clinton say that abortion should be “rare”?  The reason, surely, is that even many who favor keeping abortion legal worry that it might amount to murder, even if they aren’t sure whether it does.  Even though they are pro-choice, they aren’t comfortable with simply dismissing all moral concerns about the practice.  Hence, in order to appeal to such voters, Clinton evidently thought that he had at least to pay lip service to the idea that abortion is morally problematic enough that we ought to minimize its frequency.  Obama too essentially conceded that abortion might amount to murder.  After all, he didn’t say that fetuses don’t have a right to life, but that he didn’t know whether they did.  Cuomo essentially conceded that abortion does amount to murder – that is, after all, what his Catholic faith tells him – but held that he still wanted to keep it legal anyway.

Now, to borrow an example sometimes used in old moral theology manuals, imagine that a hunter suspects that there might be someone standing behind a certain bush, though he isn’t sure.  Is it morally permissible for him to fire into the bush, since he isn’t certain that someone is behind it?  The moral theologians and common sense agree on the answer: Of course not.  If the hunter even suspects that there might be a person there, he must not fire into the bush, even if he is not certain and indeed even if he thinks it more probable that there is no one there.

Now, Clinton and Obama are like a person who says: “I think there might well be a person behind that bush, but I’m not really sure.  Go ahead and fire into it if you like.”  Cuomo is even worse.  He is like someone who says: “I am personally convinced that there is someone standing behind that bush.  But go ahead and fire into it anyway if you like.”  Now, either of these positions is morally depraved.  But the position of these politicians on abortion is parallel, and thus no less depraved.  Clinton and Obama are saying, in effect: “Abortion might in fact amount to murder, but if you want to, go ahead and have one anyway.”  And Cuomo was saying, in effect: “Abortion is murder.  But go ahead and have one anyway if that’s what you want to do.”

I submit that it takes what Ponnuru calls “deep corruption of conscience” and culpable self-deception to talk oneself into this kind of position.  It’s just too obviously incoherent to chalk up to an honest mistake.  But it isn’t just Clinton, Obama, and Cuomo who are guilty of this.  After all, they said the sorts of things they did because they wanted to appeal to voters.  And it isn’t pro-life voters they were trying to appeal to, because the average pro-life voter would say exactly what I just said.  They were trying to appeal to pro-choice voters.  And they evidently judged that most pro-choice voters fall into group (b).  For if they thought that most such voters fell into group (c), they wouldn’t have implied that abortion at least might amount to murder.  They would have just confidently asserted that it does not.

Now, skillful politicians know their voters, and these three men were very skillful politicians.  So it seems plausible that most pro-choice voters are in group (b).  But as I have said, the position of people in that group is so obviously incoherent that only a morally corrupt person could adopt it.  Again, saying that “Abortion might be murder, but if you want to do it, go ahead” is like saying “I think there might be someone behind that bush, but go ahead and fire into it if you want to.”  So, it follows that most pro-choice voters, and not just those who favor late-term abortion, are guilty of a “deep corruption of conscience.”

I would argue that only a pro-choicer in group (c) could plausibly be characterized as lacking in subjective moral culpability.  Mind you, I’m not saying that all or even many people in group (c) really are lacking in subjective culpability.  In my opinion, the arguments in defense of abortion are so flimsy that it is hard to see how an intellectually honest person could feel certain that early-term abortions are morally permissible.  The point is just that being in group (c) would be a necessary condition for a pro-choicer’s lacking subjective culpability, even if it is by no means a sufficient condition.  Anyway, as I say, I think most pro-choicers are actually in either group (b) or group (a), and thus are culpable.

So, while I agree with Ponnuru that in theory a pro-choicer who approves of late-term abortion may thereby exhibit greater moral corruption than a pro-choicer who does not, I don’t think that in actual fact there is really much of a moral difference between the two groups of pro-choicers.  In actual fact, the subjective culpability of both groups is probably pretty close.  And again, Ponnuru himself may well agree with that, for all I know.