Cooperation with sins against prudence (and chastity) 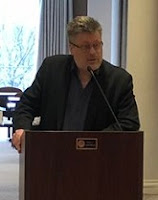 Last month I gave a talk on the theme “Cooperation with Sins against Prudence” at a conference on Cooperation with Evil at the Dominican House of Studies in Washington, D.C.  You can now listen to the talk at the Thomistic Institute’s Soundcloud page.
Prudence is the virtue by which we know the right ends to pursue and the right means by which to pursue them.  Aquinas argued that sexual immorality tends more than other vices to erode prudence.  The erosion of prudence, in turn, tends to undermine one’s general capacity for moral reasoning.  Hence, when we facilitate the sexual sins of others, we tend thereby (whether we realize it or not) to promote their general moral corruption.  In the talk, I develop and defend this theme and apply it to a critique of the views of Fr. Antonio Spadaro and Fr. James Martin.


The other presenters at the conference were Msgr. Andrew McLean Cummings, Steven Long, Fr. Ezra Sullivan, and Christopher Tollefsen.  You can find their talks at the Soundcloud page as well.