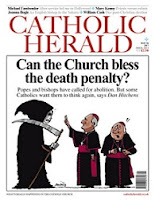 The latest issue of the Catholic Herald features an article by Dan Hitchens on Catholicism and the death penalty which discusses By Man Shall His Blood Be Shed: A Catholic Defense of Capital Punishment, which I co-authored with political scientist Joseph Bessette and which has just been released by Ignatius Press.  The article contains some remarks from a brief interview I did with the Herald.

This follows upon another recent Catholic Herald article by Marc Mason on the same subject.