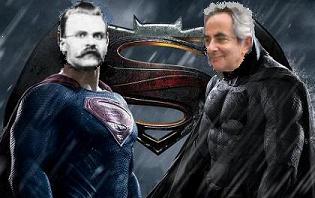 While we’re on the subject of Nietzsche: The Will to Power, which is a collection of passages on a variety of subjects from Nietzsche’s notebooks, contains some interesting remarks on consciousness, sensory qualities, and related topics.  They invite a “compare and contrast” with ideas which, in contemporary philosophy, are perhaps most famously associated with Thomas Nagel.  In some ways, Nietzsche seems to anticipate and agree with points made by Nagel.  In other respects, they disagree radically.

Nagel has for decades now emphasized that the mind-body problem is an artifact of the way modern natural science characterizes “the physical” and how it understands the notion of explanation of phenomena in physical terms.  The objective, mind-independent material world is characterized in entirely quantitative terms, and whatever does not fit this quantitative description is treated as a mere projection of the mind.  In particular, qualitative features like color, sound, taste, smell, etc. as we know them in everyday life, along with purposes or teleological features, are taken to exist only in the conscious experiences of the knowing subject.  As Nagel wrote not too long ago in Mind and Cosmos:


The modern mind-body problem arose out of the scientific revolution of the seventeenth century, as a direct result of the concept of objective physical reality that drove that revolution.  Galileo and Descartes made the crucial conceptual division by proposing that physical science should provide a mathematically precise quantitative description of an external reality extended in space and time, a description limited to spatiotemporal primary qualities such as shape, size, and motion, and to laws governing the relations among them.  Subjective appearances, on the other hand -- how this physical world appears to human perception -- were assigned to the mind, and the secondary qualities like color, sound, and smell were to be analyzed relationally, in terms of the power of physical things, acting on the senses, to produce those appearances in the minds of observers.  It was essential to leave out or subtract subjective appearances and the human mind -- as well as human intentions and purposes -- from the physical world in order to permit this powerful but austere spatiotemporal conception of objective physical reality to develop. (pp. 35-36)


Now, the method in question seems to define the “physical” and the “mental” in such a way that the latter can never be explained in terms of the former, since the former is made exhaustively quantitative and the latter is irreducibly qualitative.  The trouble that qualitative features or qualia pose for materialist attempts to explain the mind thus derives, then -- as Nagel famously argued in his 1974 essay “What is it like to be a bat?” and has repeated many times over the years -- precisely from the way materialists themselves conceive of matter, viz. in the exclusively quantitative terms of modern physics.  (I’ve discussed Nagel’s argument in detail in several places, e.g. in a series of posts on Mind and Cosmos and its critics.)


Now, some of what Nietzsche writes in The Will to Power seems fairly close to what Nagel says.  Consider the following passages (the numbers in the citations below are section numbers rather than page numbers):


“In the development of thought a point had to be reached at which one realized that what one called the properties of things were sensations of the feeling subject: at this point the properties ceased to belong to the thing.”  The “thing-in-itself” remained… [A]nalysis revealed that even force was only projected into them, and likewise -- substance.


[T]he physical explanation, which is a symbolization of the world by means of sensation and thought, can in itself never account for the origin of sensation and thought; rather physics must construe the world of feeling consistently as lacking feeling and aim -- right up to the highest human being.  And teleology is only a history of purposes and never physical! (562)


Our “knowing” limits itself to establishing quantities; but we cannot help feeling these differences in quantity as qualities.  Quality is a perspective truth for us; not an “in-itself.” (563)


[I]n a purely quantitative world everything would be dead, stiff, motionless. -- The reduction of all qualities to quantities is nonsense: what appears is that the one accompanies the other, an analogy -- (564)


Qualities are insurmountable barriers for us; we cannot help feeling that mere quantitative differences are something fundamentally distinct from quantity, namely that they are qualities which can no longer be reduced to one another.  But everything for which the word “knowledge” makes any sense refers to the domain of reckoning, weighing, measuring, to the domain of quantity; while, on the other hand, all our sensations of value (i.e., simply our sensations) adhere precisely to qualities… It is obvious that every creature different from us senses different qualities and consequently lives in a different world from that in which we live… (565)


End quote.  That reference to “every creature different from us” even calls to mind Nagel’s celebrated example of a bat, which, because it gets around the world via echolocation, has conscious experiences and sensory qualities radically different from ours, and where mere knowledge of the physiology and behavior of a bat will not reveal to us the nature of those qualities and that experience -- thus illustrating the idea that knowledge of the quantitative features focused on by physical science cannot yield knowledge of the qualitative features that define consciousness (whether human consciousness or some other kind of consciousness).


On the other hand, Nietzsche is far less confident than Nagel is that introspection of our conscious experiences reveals anything of ultimate metaphysical significance.  For one thing, he thinks the Cartesian ego or subject of experience is illusory (sections 481-492).  And in general, he thinks that introspection of our own minds, no less than perception of the external world, really only ever gets us in contact with further representations or interpretations of what it is we are purportedly aware of, rather than with reality:


Critique of modern philosophy: erroneous starting point, as if there existed “facts of consciousness” -- and no phenomenalism in introspection. (475)


“Consciousness” -- to what extent the idea of an idea, the idea of will, the idea of a feeling (known to ourselves alone) are totally superficial!  Our inner world, too, “appearance”! (476)


I maintain the phenomenality of the inner world, too: everything of which we become conscious is arranged, simplified, schematized, interpreted through and through -- the actual process of inner “perception,” the causal connection between thoughts, feelings, desires, between subject and object, are absolutely hidden from us -- and are perhaps purely imaginary.  The “apparent inner world” is governed by just the same forms and procedures as the “outer” world.  We never encounter “facts”…  (477)


[N]othing is more phenomenal (or, more clearly:) nothing is so much deception as this inner world which we observe with the famous “inner sense.” (478)


End quote.  The concepts by means of which we describe the world of qualia and conscious experience, then, in Nietzsche’s view are no more likely to track reality than the concepts we apply to the outer, physical world.  His position seems, accordingly, not unlike that of the contemporary eliminative materialist who takes our mentalistic vocabulary to express mere “folk” notions which might in principle be chucked out wholesale.  Indeed, Nietzsche writes:


Consciousness [has] a subsidiary role, almost indifferent, superfluous, perhaps destined to vanish and give way to a perfect automatism…


From the phenomena of the inner sense we conclude the existence of invisible and other phenomena that we would apprehend if our means of observation were adequate and that one calls the nerve current. (523)


Here the idea seems to be, as in contemporary eliminativism, that it might turn out that “nerve currents” and other purely “automatic” physical processes below the level of consciousness are all that exist, with consciousness itself a “superfluous” illusion.


But if introspection of the mental world no more gives us knowledge of reality that perception of the physical world, then, Nietzsche seems to conclude, both the distinction between appearance and reality and that between the material and the immaterial collapse:


Critique of the concept “true and apparent world.” -- Of these, the first is a mere fiction, constructed of fictitious entities.


The antithesis of the apparent world and the true world is reduced to the antithesis “world” and “nothing.” (567)


If there is nothing material, there is also nothing immaterial.  The concept no longer contains anything. (488)


Hence, while (as we saw in the previous post) Nietzsche would reject contemporary scientism, and while (as we saw above) it seems he would also reject reductionist materialist accounts of consciousness, that is not because he rejects naturalism, but on the contrary because he wants to push through what he regards as a more consistent form of naturalism, an essentially eliminativist form of naturalism -- one that supersedes the distinctions between appearance and reality, truth and error, distinctions which scientism and materialist metaphysics essentially preserve.  Instead he proposes looking at “knowledge” as merely a way in which the organism gains power over its environment:


There is no question of “subject and object,” but of a particular species of animal that can prosper only through a… regularity of its perceptions…


Knowledge works as a tool of power.  Hence it is plain that it increases with every increase of power…


The utility of preservation -- not some abstract-theoretical need not to be deceived -- stands as the motive behind the development of the organs of knowledge -- they develop in such a way that their observations suffice for our preservation.  In other words: the measure of the desire for knowledge depends upon the measure to which the will to power grows in a species: a species grasps a certain amount of reality in order to become master of it, in order to press it into service. (480)


So, the Nietzschean übermensch or Superman may seem thereby to get the upper hand over the Nagelian Batman of traditional metaphysics (specifically neo-Aristotelian metaphysics, in the case of Mind and Cosmos, as I noted in the series of posts on the book).  However, as you know if you saw the flick Batman v Superman: Dawn of Justice, the appearance of superior power can be illusory, as Batman ended up inflicting on Superman one of the most delightfully brutal beatdowns in cinematic and comic book history.  And the same thing would occur in the case of a Nagel v Nietzsche bout.  As we saw in my series of posts on eliminative materialist Alex Rosenberg’s The Atheist’s Guide to Reality, there is simply no way at the end of the day to make an eliminativist position coherent (and I examined attempts to do so in detail).


Nietzsche’s position faces obvious incoherence problems of its own.  The very attempt to dismiss the appearance/reality distinction as illusory quite blatantly itself presupposes an appearance/reality distinction, since the very notion of an “illusion” presupposes an appearance that fails to correspond to reality, to the facts, to what is true, etc.  Nietzsche’s pitting of his proposed biological account of knowledge-as-will-to-power against traditional metaphysics itself presupposes that this account is true, corresponds to reality, etc. in a way that traditional metaphysical theories do not.  And so forth.


That does not mean that Nietzsche is wrong to think that less extreme, reductionist rather than eliminativist forms of naturalism are mistaken.  (He is particularly hard on “the mechanistic interpretation of the world” in The Will to Power.)  He is not wrong about that.  The trouble is that since his own more radical position is even less coherent, the solution is to return to the traditional metaphysics that both positions eschew -- as Nagel does, however partially and tentatively, in Mind and Cosmos.