Marvel Team-Up: Spider-Man and The Patriarchy 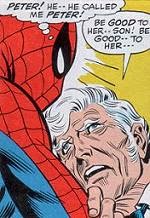 It isn’t news that fathers are often portrayed as doofuses in pop culture.  An interesting aspect of the Spider-Man movies is how aggressively they buck this trend.  The theme of fatherhood and its responsibilities absolutely permeates the series.  The noblest characters are almost all either father figures or those who honor father figures.  When father figures are portrayed negatively, it is always because they have failed to live up to the responsibilities of fatherhood, which the series clearly honors.  Indeed, once you first note this aspect of the series, you start seeing it everywhere.  The Spider-Man movies constitute one big patriarchy-fest.


Spider-Man (2002): Two father figures dominate the story: the orphaned Peter Parker’s Uncle Ben and Harry Osborn’s father Norman, who becomes the Green Goblin.  Uncle Ben is portrayed as a stable provider for his family and a gentle but firm moral guide.  He reproves Peter for failing to live up to his obligations, insisting that “with great power comes great responsibility.”  The tragic theme of the movie is that Uncle Ben is murdered precisely because Peter fails to heed him.  Peter’s motivation as Spider-Man is to redeem himself for this failure and to honor his uncle’s memory by using his power responsibly, to protect others rather than to seek wealth, glory, or the like.


If the weakling Doofus Dad of pop culture fails by way of defect -- by way, that is, of being insufficiently masculine, insufficiently fatherly -- the kind but steady Uncle Ben gets fatherhood just right.  Norman Osborn, meanwhile, is portrayed as a man who sins by excess.  He is no doofus or shirker but a driven man who has accomplished much and whose provision of Harry’s material needs could not be improved upon.  However, he is emotionally distant and absorbed in his work to the point of neglect of his son.  And he crosses the line into outright evil precisely as a reaction to losing what he has accomplished as a man and a father -- when his company is forcibly taken from him, effectively emasculating him.


Just as Peter seeks to honor the memory of Uncle Ben, Harry seeks, without apparent success, to make his father proud.  Peter, by contrast, does win the approval of Norman, who becomes for Peter another father figure of sorts.  But in contrast to Uncle Ben, Norman tempts Peter to use his power for self-aggrandizement rather than responsibly.  The movie thus establishes the central theme running throughout the Raimi Spider-Man flicks: two fathers, Uncle Ben and Norman, one exemplary and the other fallen; and two sons, Peter and Harry, both flawed but both seeking to redeem themselves in the eyes of a father figure.  Peter follows Uncle Ben, and is redeemed; Harry follows Norman into corruption.


Then there are the more subtle allusions to the theme of fatherhood and its responsibilities.  There are brief portrayals of the abusiveness of Mary Jane’s father.  The people Peter/Spider-Man most prominently protects or provides for are women and children -- Mary Jane, Aunt May, a young boy at a parade, a Roosevelt Island tram car full of children, who the Green Goblin threatens to kill.  In a terrifically over-the-top scene, Aunt May is even shown praying the Our Father -- with a picture of Uncle Ben nearby -- only to have the evil father figure, the Green Goblin, burst in as if by way of contrast.


Spider-Man 2 (2004): As with Norman Osborn, Otto Octavius (a.k.a. Doctor Octopus) -- the villain of the second Raimi movie -- is a surrogate father figure to Peter who sins by excess and turns evil when he loses what he has accomplished.  (In Octavius’s case, this happens when, as a result of his arrogance, he causes an accident which kills his wife, fuses a set of robotic tentacles onto his body, and nearly destroys the city.)


Norman Osborn is a continuing presence in this movie too, as Harry tries -- and fails -- successfully to run the company his late father started, and is urged by a ghostly vision of Norman to avenge his death.  Finding his father’s Green Goblin weaponry, he prepares to step into his shoes as a super-villain.  Meanwhile, Peter’s own mission of redeeming himself after inadvertently causing Uncle Ben’s death is reemphasized, as he reveals to Aunt May that he was at fault.


We even see Peter’s boss J. Jonah Jameson portrayed as a father, as the movie introduces his son John Jameson as Peter’s rival for Mary Jane’s affections.


Spider-Man 3 (2007): Raimi’s last Spider-Man movie piles on the fatherhood-related elements.  The imperative to avenge a fallen father figure drives not only Harry, who takes aggressive action against Peter/Spider-Man (whom he blames for Norman’s death), but also Peter, who discovers that one of Uncle Ben’s killers (the Sandman) is still alive, and hunts him down.  The Sandman, in turn (whose killing of Uncle Ben turns out to have been accidental), is portrayed as a misguided father whose crimes are motivated by a desire to help his ailing daughter.  We also meet Captain Stacy, the father of Peter’s friend Gwen.


The failures of father figures and son figures are highlighted throughout.  Harry is once again haunted by a vision of his father, whose malign influence continues to lurk in the background of the series.  Harry’s insecurities about living up to Norman’s legacy are cruelly mocked by Peter during one of their battles.  Eddie Brock (a.k.a. Venom), who is in love with Gwen, evidently fails to impress Captain Stacy and disgraces himself with his employer Jonah Jameson.  The Sandman’s wife chides him for his failures as a father.  Peter laments his rudeness to Mr. Ditkovitch, his landlord and the father of his friend Ursula.  Peter’s temporary turn to the dark side (under the influence of the Venom symbiote) is a failure to live up to Uncle Ben’s admonition that with great power comes great responsibility.


The Amazing Spider-Man (2012): The fatherhood theme is if anything even more pronounced in the new series of Spider-Man movies.  In both of the recent movies, Peter is haunted by the questions of what happened to his late father, Richard Parker, and why he abandoned Peter when he was a child.  Conflict with Gwen’s father Captain Stacy, who becomes another surrogate father figure to Peter, also becomes a major theme of the new series.  Uncle Ben’s gentle but firm guidance and Peter’s quest to redeem himself for inadvertently enabling Ben’s death continue as key elements as well.  Like Norman Osborn and Otto Octavius in the original movies, Curt Connors -- who becomes the Lizard, the movie’s villain -- is yet another father figure to Peter who turns to evil.


There’s a scene where Spider-Man saves a man’s little boy, after which he observes the affection between the father and his son and is perhaps reminded of what he has missed out on with his own father.  A new imperative, distinct from Peter’s need to redeem himself for Uncle Ben’s death, enters the series at the end of the movie: A dying Captain Stacy makes Peter promise to stay away from Gwen, lest she be harmed by her association with him.  But Peter indicates that this is a promise he will not keep.


The Amazing Spider-Man 2 (2014): Just as Harry was haunted by visions of his father Norman in the Raimi Spider-Man movies, Peter, having broken the promise he made at the end of the previous movie, is haunted in this one by visions of Captain Stacy.  Norman Osborn is also a background presence in this movie, and the dysfunctional father-son dynamic between him and Harry is reintroduced into the series.  Peter’s own father, Richard, is vindicated, as we learn that he had good, indeed heroic, reasons for abandoning Peter.


Peter himself will feel less heroic by the end of the movie, though, as his broken promise to Captain Stacy results in exactly what the captain feared -- Gwen’s death.


The main themes of the Spider-Man movies would thus seem to be that fathers fail precisely when they are inadequately fatherly (Norman Osborn and the other father figures turned villains), and that sons fail when they disobey good fathers, with those who depend on these father figures suffering as a result (Peter, Aunt May, and Gwen).  At least in the cases of Uncle Ben, Richard Parker, and Captain Stacy, Father knows best.