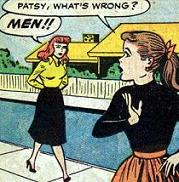 
Similarly, not every ad hominem attack -- an attack “against the man” or person -- involves a fallacious ad hominem.  “Attacking the man” can be entirely legitimate and sometimes even called for, even in an argumentative context, when it is precisely the man himself who is the problem.


Hence, suppose you put forward an argument against “same-sex marriage” and someone responds either by calling you a bigot, or by suggesting that the only reason you are putting forward such an argument is to rationalize some religiously motivated prejudice.  Here we have classic examples of ad hominem fallacies.  In the first case the person responding to you is trying to change the subject -- trying to make you and your alleged bigotry the issue, where what is at issue is the cogency of your argument.  In the second case, the person is not changing the subject -- he is addressing the question of whether your argument is cogent -- but he is nevertheless appealing to an irrelevant consideration in assessing its cogency, since whether your argument is cogent or not has nothing essentially to do with your motives for putting it forward.


However, if what is at issue is not a person’s claim or argument, but rather precisely some aspect of the person himself, there is no fallacy in calling attention to his defects, and in some cases it can even be entirely appropriate to do so in a polemical fashion.


For example, suppose what is at issue is whether a certain person is a reliable witness or an unbiased source of information, as in a court case.  Then there is no fallacy whatsoever in showing that his track record reveals him to be a compulsive liar, or to have a bad memory or bad eyesight, or to have been drunk at the time of the events he claims to have witnessed, or to have a personal stake in the outcome of the case.  These are ad hominem criticisms -- criticisms directed “against the man” himself -- but there is no fallacy involved, because the credibility of the man himself is precisely what is at issue.


Or suppose that what is at issue is, again, not whether a certain claim is true or a certain argument cogent, but instead whether a certain person is reasonable, intellectually honest, worth trying to have a conversation with, etc.  For example, suppose someone in a combox shows himself by his pattern of behavior to be an ignoramus, a crank, a troll, etc. -- say by repeatedly making sweeping, ungrounded, or unhinged assertions, dismissing ideas and arguments he evidently does not even understand or books he hasn’t bothered to read, or indeed by committing ad hominem and other fallacies right and left.  There is in such a case nothing wrong with calling such a person an ignoramus, a crank, a troll, etc. and refusing to engage with him any further.  That is certainly an attack on the person, but it is no fallacy.  It is just a straightforward inference from the facts, a well-founded judgment about him and his behavior, rather than a fallacious response to some argument he has given.


Or suppose someone gains a reputation for expertise on some important matter of public controversy when in fact his views about the matter are laughably off-base and demonstrably ill-informed.  Suppose further that he manifests extreme arrogance and dismissiveness toward those who actually do have expertise on the matter, where the fact of his unjustified self-confidence only serves to reinforce, in those who don’t know any better, the false impression that he must know what he is talking about.  Here too an attack on the person himself is legitimate precisely because what is at issue is one of his personal qualities, viz. his arrogant pretense of expertise.  Indeed, ridicule and other polemical methods can be legitimate tools in such an attack, since arrogant pretense can often effectively be countered in no other way, and treating the offender more gently might only reinforce the false impression that he and his views are respectable.  Hence it is, for example, not only legitimate, but in my view imperative, not only to refute the sophistries of smug hacks like Richard Dawkins and Lawrence Krauss, but to administer a severe rhetorical beating as one does so.


[Here I must digress to address a pet peeve.  Something called “Feser’s tone” is the subject of occasional handwringing, not only among some of my secularist critics, but also among a handful of bed-wetters in the Christian blogosphere.  But there is no such thing as “Feser’s tone,” if that is meant to refer to some vituperative modus operandi of mine.  Sometimes my writing is polemical; usually it is not.  I have written five books and edited two others.  Exactly one of them -- The Last Superstition -- is polemical.  Of course, some of my non-academic articles and blog posts are also polemical.  But that is an approach I take only to a certain category of opponent, and typically toward people who have themselves been polemical and are merely getting a well-earned taste of their own medicine.  Complaining about this is like complaining about police who shoot back at bank robbers.  I’ve addressed the question of why and under what circumstances polemics are justified in this post and in other posts you’ll find linked to within it.  End of digression.]


Another example.  The tu quoque is a species of ad hominem fallacy in which a claim is rejected merely because the person advancing it does not act in a way consistent with it.  But there are cases where the fact that a person’s actions are inconsistent with the claim he is making is clearly relevant to evaluating the claim.  Suppose, for instance, that someone asserts that it is not possible to make assertions.  This is a performative self-contradiction, and while the probative value of identifying performative self-contradictions is a matter of philosophical controversy, it is legitimate at least to wonder whether a view that entails such a contradiction is coherent.  If someone could carry out a certain course of action that he recommends to others but does not bother even to try to do so himself -- the lush who condemns others for their drinking, say -- that by itself obviously does not show that his advice is not good advice.  Mere hypocrisy is not of much epistemological interest.  But if there is reason to think that someone could not even in principle adopt a certain policy, then it is at least questionable whether the policy is a good one, or reflects a coherent train of thought.


Finally, there are certain positions the very entertaining of which cannot plausibly fail to reflect some degree of moral defect in the person who advances them.  For moral character involves, in part, the having of morally upright sensibilities, and these sensibilities will tend to lead a person to regard certain actions as beyond the pale and unworthy of serious consideration.  Hence that a given person does not so regard them is evidence of defective sensibilities.  Suppose, for example, that someone seriously suggested that there are good arguments in defense of torturing babies “for fun.”  It is hard to see how someone could sincerely believe such a thing unless his moral sensibilities were deeply corrupt.  (Whether he is culpable for this corruption is a question I leave to one side as irrelevant to the present point.)


Notice what I am not saying.  I am not saying that “You are a bad person; therefore your argument is invalid!” is a good response.  It is not a good response; that would be an ad hominem fallacy.  If the practices a person is defending really are immoral, there should be independent reasons, having nothing to do with his personal character, that show that they are.


All the same, if they are immoral, and if moral character is in part a matter of having the right sensibilities, and if a person shows by what he is willing to regard as a live option that he does not have the right sensibilities, then there is no fallacy in pointing this out.  Indeed, not to point it out might in some cases threaten to undermine the moral sensibilities that prevail in society at large, insofar as it might make certain immoral actions seem respectable or defensible.  (For more on this issue, see my discussion of Elizabeth Anscombe’s views on the subject in an earlier post.)


There are at least five sorts of case, then, in which criticism “of the man” can be legitimate and certainly not fallacious, even when the larger context is one in which arguments are being weighed: when determining whether someone’s testimony is likely to be reliable; when evaluating his worthiness as a philosophical conversation partner;  when exposing the fraudulence of his public reputation for expertise on some matter; when exposing performative self-contradictions associated with some philosophical position; and when noting that a person’s willingness to take certain views seriously is evidence of a corruption of his moral sensibilities.  None of this shows that a person’s claims or arguments themselves are undermined merely by calling attention to his personal defects.  To suppose that it does would be fallacious.  But those who shout “Ad hominem!” too often do not know what an ad hominem fallacy actually is.