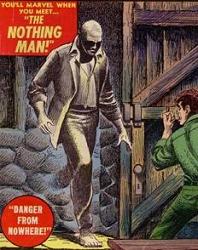 
But Krauss likes nothing so much as the sound of his own voice, even when he’s got nothing of interest to say.  A friend calls my attention to a recent Australian television appearance in which Krauss, his arrogance as undiminished as his cluelessness, commits the same puerile fallacies friends and enemies alike have been calling him out on for over a year now.  Is there any point in flogging a horse by now so far past dead that even the Brits wouldn’t make a lasagna out of him?  There is, so long as there’s still even one hapless reader who somehow mistakes this wan ghost for Bucephalus.

Those looking for an extra Lenten penance might consider watching the whole broadcast.  The rest of us can skip ahead to about 27 minutes in, where a questioner asks Krauss to explain how the universe could arise from nothing.  Krauss answers:


[E]mpty space, which for many people is a good first example of nothing, is actually unstable.  Quantum mechanics will allow particles to suddenly pop out of nothing and it doesn't violate any laws of physics.  Just the known laws of quantum mechanics and relativity can produce 400 billion galaxies each containing 100 billion stars and then beyond that it turns out when you apply quantum mechanics to gravity, space itself can arise from nothing, as can time.  It seems impossible but it’s completely possible and what is amazing to me is to be asked what would be the characteristics of a universe that came from nothing by laws of physics.  It would be precisely the characteristics of the universe we measure.


This is, of course, a summary of the argument of Krauss’s book.   And the problem with it, as everybody on the planet knows except for Krauss himself and the very hackiest of his fellow New Atheist hacks, is that empty space governed by quantum mechanics (or any other laws of physics, or even just the laws of physics by themselves) is not nothing, and not even an “example” of nothing (whatever an “example of nothing” means), but something.  And it remains something rather than nothing even if it is a “good first approximation” to nothing (which is what Krauss presumably meant by “good first example”).  When people ask how something could arise from nothing, they don’t mean “How could something arise from almost nothing?”   They mean “How could something arise from nothing?”  That is to say, from the absence of anything whatsoever -- including the absence of space (empty or otherwise), laws of physics, or anything else.  And Krauss has absolutely nothing to say about that, despite it’s being, you know, the question he was asked, and the question he pretended to be answering in his book.  (Krauss has the brass later in the show to accuse a fellow panelist of a “bait and switch”!)


When another questioner calls Krauss out on this subtle-as-a-sledgehammer sleight of hand, he smugly answers: “Science changes the meaning of things.  It’s called learning.”  Well, no, actually it’s called the fallacy of equivocation, and it isn’t “science” that is committing it, but just some guy who’s written a lame pop science book.  Krauss continues:


[Y]ou may have said that nothing was an infinite empty void like the Bible would have said.  Well, that would be empty space, okay?  We’ve learned that that kind of nothing is much more complicated than you thought.  There’s nothing in it.  There’s no real particles but it actually has properties but the point is that you can go much further and say there’s no space, no time, no universe and not even any fundamental laws and it could all spontaneously arise and it seems to me if you have no laws, no space, no time, no particles, no radiation, it is a pretty good approximation of nothing…


[B]ecause of discovering that empty space has energy, it seems quite plausible that our universe may be just one universe in what could be almost an infinite number of universes and in every universe the laws of physics are different and they come into existence when the universe comes into existence.


End quote.  Now, leave aside the dubious biblical exegesis.  Ignore the questionable multiverse stuff.  Just savor the crystalline purity of Krauss’s irrationality.  In answer to the charge that he has merely changed the subject rather than addressed the question, Krauss’s response is… once again to change the subject (talking about “space,” “properties,” an “approximation of nothing,” “energy,” “infinite number of universes,” etc., which of course are not nothing but something) while continuing to insinuate that he is somehow addressing the original question (which had to do with how something could come from nothing, not from something).   As if repeating the fallacy makes it less of a fallacy.  Again, for over a year now this objection has been raised against Krauss by all and sundry, including by people who know the relevant physics as well as he does and logic and philosophy far better than he does.  He’s had ample time to consider the objection and try to formulate a response.  And that’s the best he can do.


A physicist friend of mine and I once sat out on the back porch talking as a moth circled the light above us, repeatedly banging into it.  He interrupted our conversation to note that he’d always found this typical bit of moth behavior annoyingly contemptible for its sheer stupidity -- for the stubborn pointlessness of the moth’s behavior, incapable though it was of acting any differently.  When I think of Krauss I think of that moth.


Let’s watch the moth finally crash and burn, shall we?   Krauss doesn’t actually shut up for another half hour or so, and a whole series of posts could be devoted to the various silly and uninformed things he says.  But he reaches something like a crescendo of incoherence a little past halfway through the show.  Here it is:


I would argue that nothing is a physical quantity.  It’s the absence of something.  Okay.  So to understand what nothing is, you have to think carefully about what something is and that's what science tells us.  So we’re trying to - we’re trying to take an empirical approach to try and understand what the absence of something is and I think there are deep philosophical issues that we’re not going to resolve in this program…


Or maybe it isn’t, since Krauss casually allows that “there are deep philosophical issues” that he doesn’t pretend to have resolved.  And why should he be expected to resolve them?  After all, they’re only what the question he pretends to have answered was always about in the first place.


[I’ve addressed Krauss-like pseudo-scientific nonsense about something coming from nothing in earlier posts, here, here, here, and here.  For discussion of the larger issues underlying these debates, see the posts collected here.]