The smell of the sheep (Updated) 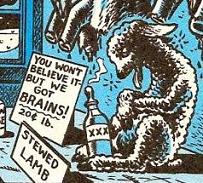 Being insulted by the pop atheist writer John Loftus is, to borrow Denis Healey’s famous line, like being savaged by a dead sheep.  It is hard to imagine that a human being could be more devoid of argumentative or polemical skill.  Commenting on my recent First Things exchange with atheist philosopher Keith Parsons, Loftus expresses bafflement at Parsons’ preference for the Old Atheism over the New Atheism.  Unable to see any good reason for it, Loftus slyly concludes: “Keith Parsons is just old.  That explains why he favors the Old Atheism.”  He also suggests that Parsons simply likes the attention Christians give him.


Well, as longtime readers of this blog will recall from his sometimes bizarre combox antics, Loftus certainly knows well the reek of attention-seeking desperation.  Sadly, being John Loftus, he tends to misidentify its source.

Something else that never occurs to Loftus is that if he really wants to know why Parsons prefers the Old Atheism to the New, he might, y’know, try checking to see what Parsons actually said about that in his letter to First Things.  (You’d think a purportedly tough-minded, science-based skeptic like Loftus might prefer this method of gathering actual evidence to that of, say, going with whatever lame ad hominem explanations popped into his head.  Or at any rate, you’d think that if you hadn’t actually had to deal with John Loftus before.)


Now, what Parsons actually said is that the trouble with New Atheist writers is “their logical lacunae and sophomoric mistakes” when addressing philosophical matters, and their tendency to “tar everything with the same brush” rather than distinguishing more sophisticated religious arguments and claims from cruder ones.  “[D]efeating your opponents’ arguments,” says Parsons, “requires (a) taking their best arguments seriously, and (b) doing your philosophical homework.”  The “Old Atheists” were more likely to do that than the “New Atheists.”  Hence Parsons’ preference.  He simply prefers to address what the best arguments of the other side actually say, rather than attacking straw men, begging the question, and committing other fallacies.  What could Loftus possibly object to in that?


The answer, of course, is that if attacking straw men, begging the question, and committing other fallacies were ruled out of bounds for New Atheists, Loftus would find himself suffering from permanent writer’s block.  Consider his reasons for holding, contra Parsons, that the New Atheism is superior to the Old.  The New Atheism, says Loftus, is willing to tell “the whole truth and nothing but the truth about religion,” and to expose the “irrationality” of arguments for religion, which “deserve little or no respect.”  New Atheist intellectuals “are so convinced religious faith is wrong from within their own disciplines they will venture outside their disciplines, disregarding the fact that people like Feser and Parsons will call them ignorant for doing so.”


But of course, Parsons’ point is precisely that New Atheists do not in fact tell “the whole truth and nothing but the truth about religion.”  Rather, they tend to attack straw man, to criticize weak arguments while remaining silent about more interesting and formidable ones, etc.  Parsons’ point is precisely that some religious ideas and arguments, despite being (in Parsons’ view) mistaken, are nevertheless not simply “irrational” or “deserv[ing of] little or no respect,” but rather ought to be responded to seriously.  Parsons’ point is precisely that those academic New Atheists who have “ventured outside their disciplines” have not earned the right to do so, because they have proven themselves incompetent where matters of philosophy and theology are concerned.  And it is not just that critics like Parsons and I call them ignorant; we have shown that they are in fact ignorant by citing a great many specific examples of straw men they have attacked, questions they have begged, arguments they have ignored, and so forth.


Pretty obviously a problem, you might think.  But maybe Loftus can’t see the obvious because he’s got his head lodged so far up that goofball hat he’s always wearing.  Or at least, that’s where he thinks it’s lodged.


(Related reading: My First Things review of Jerry Coyne’s Faith versus Fact, which was the occasion for my recent exchange with Keith Parsons, can be found here.  A follow-up post on the book can be found here.  A couple of years ago, Parsons and I engaged in a much more substantive and very fruitful series of exchanges, an index to which can be found at The Secular Outpost.)

UPDATE 4/8: Keith Parsons offers a polite and reasoned reply to Loftus at the Secular Outpost.  Naturally, Loftus says that he refuses to respond to Parsons, other than to whine that Parsons is “attack[ing]” him, is “ignorant,” and that the Secular Outpost is “unfair.”


Got that?  In Loftus’s mind, Parsons’ offering a polite and reasoned defense of himself against Loftus’s argument-free, evidence-free ad hominem attack on Parsons is tantamount to Parsons unfairly and ignorantly attacking Loftus.  Loftus evidently has lifetime pass to New Atheist Fantasyland.