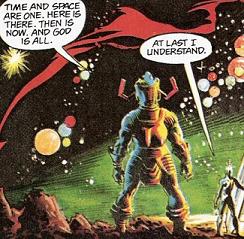 For the Platonist, the essences or natures of the things of our experience are not in the things themselves, but exist in the Platonic “third realm.”  The essence or nature of a tree, for example, is not to be looked for in the tree itself, but in the Form of Tree; the essence of a man is not to be looked for in any human being but rather in the Form of Man; and so forth.  Now, if the essence of being a tree (treeness, if you will) is not to be found in a tree, nor the essence of being a man (humanness) in a man, then it is hard to see how what we ordinarily call a tree really exists as a tree, or how what we call a man really exists as a man.  Indeed, the trees and men we see are said by Plato merely imperfectly to “resemble” something else, namely the Forms.  So, what we call a tree seems at the end of the day to be no more genuinely tree-like than a statue or mirror image of a tree is; what we call a man seems no more genuinely human than a statue or mirror image of a man is; and so forth.

The implication is that trees, men, and the like are not true substances.  Only the Forms are true substances.  The world of experience is insubstantial, Heraclitean, a realm of confused reflections and shadows of the true, Platonic world.  When we add to this the Neo-Platonic/Augustinian thesis that the Forms are really just ideas in the divine intellect, then that divine intellect becomes the true substance.  And the insubstantial world of our experience becomes a confused reflection or shadow of God.  There is a thin line between such a view and pantheism.


Avoiding such a result requires putting treeness back into trees, humanness back into men, and in general the forms or essences of things back into the things themselves.  It requires, in other words, an Aristotelian rather than Platonic conception of form -- form as formal cause, and in particular as substantial form, an immanent or “built in” principle rather than an extrinsic one.  Removing formal cause out of the world and putting it elsewhere removes substance out of the world and relocates it elsewhere.


I’ve discussed many times (e.g. here) how a similar result follows when efficient cause is entirely removed from the world and relocated in God, as in occasionalism.  Since agere sequitur esse (“action follows being” or “activity follows existence”), if nothing in the world of our experience really does anything and God does everything, then nothing in the world really has any being, and only God has it.  What we think of as the world is really just God in action.  Again, pantheism.


I’ve also discussed many times (e.g. here) how removing final cause from the world and relocating it entirely in God -- as Paley-style design arguments essentially do -- has the same effect.  For efficient cause (the Aristotelian-Thomistic metaphysician argues) presupposes final cause.  Remove the latter and you thereby remove the former.  And if you relocate them in God you’re implicitly back in an occasionalist position, with pantheism as the sequel -- whether or not you actually draw the inferences.  (For further discussion of final causality, efficient causality, and occasionalism, see my essays “Between Aristotle and William Paley: Aquinas’s Fifth Way” and “Natural Theology Must Be Grounded in the Philosophy of Nature, Not in Natural Science, “ both available in Neo-Scholastic Essays.)


Entirely removing material cause from the world is the most obvious road to pantheism.  The material cause of a thing is, to put it crudely, what it’s made of.  When you say, as Spinoza and other pantheists do, that the things of our experience are really modes of God, you are in effect making God their material cause.  Thus, if instead you say that things have a material cause that is distinct from God and internal to the things themselves, you are thereby rejecting pantheism.


To do that, though, you need (once again) to affirm the other three Aristotelian causes too.  Matter without substantial form is pure potentiality, and thus in no way actual.  So, for things really to have a material cause immanent to them, they also need an Aristotelian formal cause.  They need, as well, immanent teleology or finality, since a potentiality (and thus matter) is always a potentiality for some outcome or range of outcomes (an extremely wide one in the case of prime matter or pure potentiality for reception of form).  And they need also immanent efficient causal power, since (again) agere sequitur esse, so that a material thing that could do nothing would be nothing.


The bottom line is that the Aristotelian doctrine of the four causes is essential to avoiding pantheism and views which tend to approximate pantheism (such as Gnosticism).


Why is it important to avoid such views?  Well, for one thing, they’re false.  The arguments that show that God exists also show (we Aristotelian-Scholastic types claim) that he is utterly distinct from the world.  And there are theological dangers in blurring this distinction.  Such blurring tends, naturally, either to divinize the world or to secularize God.  It divinizes the world to the extent that the blurring leads one to ascribe divine attributes to the world (e.g. ultimacy, holiness, perfect goodness, etc.).  It secularizes God to the extent that it leads one to ascribe the world’s characteristics to God (e.g. changeability, temporality, composition of parts as opposed to simplicity).  The proximate implication of both tendencies is idolatry; their remote implication is atheism.


Idolatry results either when one directs toward the world attitudes appropriately directed only toward God (as in the nature worship characteristic of extreme environmentalism), or when one’s conception of God is so deficient that one essentially makes of God a creature (as in theological views that attribute to the divine nature a material body, or changeability, or metaphysical parts, or ignorance of future events).  (As I’ve argued before, some conceptions of God can be so deficient that even the believer who uses the language of classical theism may in fact be directing his worship toward something other than God.)


One way atheism can result is when the pantheistic “collapse” of God into the world goes so far that the characteristically divine elements of the picture drop out.  If it is really the world that is the ultimate reality anyway, then why bother with the “God” stuff?  It’s simpler just to speak of the world and leave it at that.  Another way atheism can result is when God ends up seeming so creature-like that he ceases to seem God-like.  If God is changeable, can learn things like we do, is made up of parts, etc., then he’s really different from us only in degree.  He’s like a wizard, or an extraterrestrial, or a superhero, or a ghost or other spirit.  And in that case he’s really just another part of the natural world broadly construed -- not really God at all, as traditionally understood -- and the question whether he exists is no more relevant to the truth of naturalism than is the question whether wizards or extraterrestrials exist.  (As I’ve argued before, atheism can be a reasonable response to anthropomorphic and otherwise vulgarized conceptions of God.)


Given their theological dangers, then, it is no surprise that the Catholic Church condemns pantheism and related doctrines as heretical.  There are also moral dangers.  Recall the Scholastic doctrine that being is convertible with goodness.  They are really the same thing considered from different points of view.  (See my essay “Being, the Good, and the Guise of the Good,” also available in Neo-Scholastic Essays.)  A view which denies the reality of some aspect of the world of our experience is thus bound to deny also its goodness.


To be sure, and as I’ve indicated, if your emphasis is on the theme that the material world is really God, then you are bound to exaggerate the goodness of the material world, to the point of idolatry.  However, if your emphasis is instead on the theme that the material world per se is unreal, then you are bound to minimize or even deny the goodness of the material world.  (As I’ve noted before, views which collapse distinctions tend to be like this -- they can be taken in radically divergent directions.)  Now, denigration of the material world is morally disastrous, since it is untrue to human nature.  Notoriously, it tends to lead to excess either in the direction of rigorism or in the direction of laxity.  For if matter, and thus the body, is unreal, then you might conclude that all indulgence of bodily appetites is gravely evil, since it locks you into unreality; but you might also conclude that all such indulgence is morally trivial, since what happens in the body -- which is unreal -- cannot affect the real you.


So, the implications of getting things wrong in metaphysics can be very far-reaching indeed, contra those fideists, nouvelle theologie types and other opponents of Scholasticism who dismiss such concerns as just so much hair-splitting.  As usual, the Scholastics knew what they were doing.  And as usual, their critics do not.