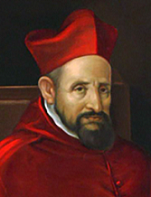 In a recent Catholic World Report article supplementing the argument of By Man Shall His Blood Be Shed, I called attention to the consistent support for capital punishment to be found in the Doctors of the Church.  (See the article for an explanation of the doctrinal significance of this consensus.)  As I there noted, St. Robert Bellarmine is an especially important witness on this topic.  For one thing, among all the Doctors, Bellarmine wrote the most systematically and at greatest length about how Christian principles apply within a modern political order, specifically.  For another, he addressed the subject of capital punishment at some length, in chapters 13 and 21 of De Laicis, or the Treatise on Civil Government.  What Bellarmine has to say strongly reinforces the judgment that the Church cannot reverse her traditional teaching that capital punishment is legitimate in principle (a judgment for which there is already conclusive independent evidence, as the writings referred to above show).

A lot could be said about Bellarmine’s various lines of argument, but for the moment I will focus on just two points.  (In what follows I quote from the Stefania Tutino translation of De Laicis in the new Liberty Fund volume of Bellarmine’s political writings.)


Among the chief heretical beliefs of the Anabaptists and Antitrinitarians of our time there is one that says that it is not lawful for Christians to hold magistracy and that among Christians there must not be power of capital punishment, etc., in any government, tribunal, or court. (p. 5, emphasis added)


To understand the significance of this remark, several points have to be kept in mind.  First, Bellarmine’s aim in this book is to address the topic of how Christian moral principles, specifically, apply to politics.  He is not addressing questions about what might be merely theoretically possible under natural law considered apart from the Gospel.  Second, Bellarmine is also concerned in the book to respond to the heretical movements of his day, and not merely to take a side in disputes between orthodox Catholics.  Third, he classifies the thesis that capital punishment is contrary to Christian morality as a heresy, and not merely an error of some lesser sort.  Nor is this an incidental remark.  Again, he devotes two chapters to the subject, and what he has to say about it is theologically closely integrated with what he says about other topics (e.g. just war) and about Catholic political philosophy in general.


Furthermore, he has ample grounds for this judgment.  He appeals first to scriptural evidence, including Genesis 9:6, Romans 13, and many other passages.  Bellarmine explicitly considers and explicitly rejects a “proverbial” reinterpretation of Genesis 9:6, and among the points he makes is that such a reinterpretation is contrary to the traditional Jewish understanding of the passage.  He points out that in the Targums the passage is paraphrased as: “Whoever sheds men’s blood before witnesses, by sentence of a judge his blood should be shed” (p. 49, emphasis added).  The attempt to read opposition to capital punishment out of the Sermon on the Mount is one that Bellarmine characterizes as a heretical Anabaptist reading, and he cites Augustine, Chrysostom, Hilary, Aquinas, and Bonaventure against this reading.


Second, Bellarmine cites the teaching of the Fathers of the Church as evidence of the legitimacy in principle of capital punishment.  He also cites papal teaching, specifically the teaching of Pope Innocent I and Pope Leo X.  Finally, he cites the natural law.  In short, Bellarmine’s defense of capital punishment is essentially of the same kind that Joe Bessette and I develop at greater length in the first two chapters of By Man Shall His Blood Be Shed.


Now, it won’t do for Catholics who claim that capital punishment is always and intrinsically immoral to dismiss Bellarmine’s remarks on the grounds that they are not infallible.  First of all, Bellarmine is a Doctor of the Church, and a Doctor who specializes precisely in the bearing of Christian moral principles on matters of politics in the modern world.  He is, in effect, recognized by the Church as someone uniquely qualified to advise Catholics on matters like the one in question.  And again, his doctrine on capital punishment is not some incidental teaching, but instead is argued for systematically and integrated into the rest of his thought.


Second, Bellarmine makes the remark about the heretical nature of absolute opposition to capital punishment in a casual or matter-of-fact way.  Evidently, he takes himself merely to be expressing the received wisdom on the matter among orthodox Catholics, not some controversial opinion of his own.  And as the evidence cited in By Man and the CWR article linked to above demonstrate, he was absolutely correct to do so.


So, to dismiss Bellarmine on this issue is to claim that a Doctor of the Church who specialized in such matters – not to mention all the other authorities he cites, and the centuries-old teaching of the Church – got it wrong, and that the heretics he opposed were right all along.


I submit that this is not possible if the claims the Catholic Church makes about her own authority are true.  There are cases in Church history where a teaching once regarded as optional was later regarded as a requirement of orthodoxy.  But there is no case where a teaching once regarded as heretical was later regarded as orthodox.  And it would be a major problem if there were such a case, given what the Church claims about the reliability of the ordinary magisterium.  (And no, slavery and religious liberty are not counterexamples.)


In another striking passage, Bellarmine writes:


[I]n Acts 5 Peter killed Ananias and Sapphira because they dared to lie to the Holy Spirit, while in Acts 13 Paul punished with blindness a false prophet who tried to turn a proconsul away from the faith. (p. 104)


I say this is “striking,” but actually I don’t think that this passage (or for that matter, the earlier passage describing absolute opposition to capital punishment as heretical) would have been at all striking to the Catholic readers of Bellarmine’s time.  It is striking to modern readers, who are so used to thinking of violence of any kind as extremely morally problematic at best that the idea of an apostle inflicting it seems to them unfathomable.


Now, a critic might quibble about whether it is accurate to say that Peter – as opposed to God – killed Ananias and Sapphira.  But Bellarmine’s reading is by no means idiosyncratic.  Though the deaths of the pair are directly caused by God, Peter clearly plays an instrumental role.  As the Catholic Encyclopedia says:


When Ananias and Sapphira attempt to deceive the Apostles and the people Peter appears as judge of their action, and God executes the sentence of punishment passed by the Apostle by causing the sudden death of the two guilty parties. (Emphasis added)


Even if it were argued that in fact Peter merely witnessed, rather than in any way caused, Ananias’s death, it is difficult to make the same argument with respect to Sapphira’s death.  Acts tells us:


After an interval of about three hours [Ananias’s] wife came in, not knowing what had happened.  And Peter said to her, “Tell me whether you sold the land for so much.” And she said, “Yes, for so much.”  But Peter said to her, “How is it that you have agreed together to tempt the Spirit of the Lord?  Hark, the feet of those that have buried your husband are at the door, and they will carry you out.”  Immediately she fell down at his feet and died.


Clearly, Peter is testing Sapphira here, and on finding her guilty pronounces that she will die just as Ananias did.  Even if it were suggested that Peter is merely predicting what will happen, he knows full well what fate Sapphira faces if she says the wrong thing.  He doesn’t warn her, doesn’t beg her to repent, and doesn’t fret over the affront to her dignity as a human person after she drops dead.  Nor can it be maintained that Peter showed thereby that he didn’t understand the Gospel as well as we do.  For it is God who strikes Sapphira down on the occasion of Peter’s testing of her, where Peter fully expects God to do this.  That is a kind of divine seal of approval on Peter’s action.  The Holy Spirit doesn’t make of this a “teaching moment,” by which Peter might be brought to a deeper understanding of mercy.  Rather, He simply summarily inflicts on Sapphira exactly the punishment that Peter anticipates and thinks she deserves.


Something similar can be said of the action of St. Paul cited by Bellarmine.  Acts tell us:


[T]he proconsul, Sergius Paulus, a man of intelligence… summoned Barnabas and Saul and sought to hear the word of God.  But Elymas the magician (for that is the meaning of his name) withstood them, seeking to turn away the proconsul from the faith.   But Saul, who is also called Paul, filled with the Holy Spirit, looked intently at him and said, “You son of the devil, you enemy of all righteousness, full of all deceit and villainy, will you not stop making crooked the straight paths of the Lord?  And now, behold, the hand of the Lord is upon you, and you shall be blind and unable to see the sun for a time.”  Immediately mist and darkness fell upon him and he went about seeking people to lead him by the hand.  Then the proconsul believed, when he saw what had occurred, for he was astonished at the teaching of the Lord.


Though not a capital sentence, this is pretty harsh stuff.  Paul does not warn this false prophet to repent (much less initiate ecumenical dialogue with him or the like).  He strikes him blind.  Nor can it be maintained that Paul didn’t understand the Gospel and its call to mercy as well as we do, for Acts tells us that Paul “was filled with the Holy Spirit,” and of course it is God who miraculously carries out Paul’s sentence.  Here too we have a divine seal of approval on a harsh action, rather than a divine rebuke of it.


Clearly, St. Peter, St. Paul, and St. Robert Bellarmine (not to mention all the other saints I’ve cited elsewhere in connection with this subject) were not men likely to get weepy at the execution of sadistic perverts like Ted Bundy or John Wayne Gacy.  Somebody has gotten the demands of Christian morality wrong, but why should we suppose it is them?