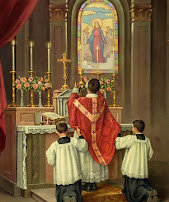 What attitude should a Catholic take toward cruel and arbitrary prelates – for example, those who endlessly stir up division and then shamelessly blame the division on those who note and bemoan the fact?  In Quodlibet VIII, Aquinas makes some relevant remarks when addressing the question whether “evil prelates” should be honored.  You can find the passage in the Nevitt and Davies translation of Thomas Aquinas’s Quodlibetal Questions, from which I quote:

We can distinguish two things about a prelate: the person himself and his office, which makes him a sort of public person.  If a prelate is evil, he should not be honored for the person he is.  For honor is respect shown to people as a witness to their virtue.  Hence, if we honored such a prelate for the person he is, we would bear false witness about him, which is forbidden in Exodus 20: You shall not bear false witness against your neighbor.  But, as a public person, a prelate bears an image and occupies a position in the Church… that does not belong to him but, rather, to someone else, viz. Christ.  And, as such, his worth is not determined by the person he is, but by the position he occupies.  He is like one of those little stones used as a placeholder for 100 marks on a scale – quite worthless in itself.  As Proverbs 26 says: He who gives honor to a fool is like one who puts a stone on Mercury’s heap… So, too, an evil prelate should not be honored because of who he is but because of the one whose position he holds.  The case is similar to the veneration of images, which is directed to the things depicted therein, as Damascene says.  Hence Zechariah compares an evil prelate to an idol: Woe to the pastor and idol who deserts the flock…

An evil prelate is unworthy to be a prelate and receive the honors due to prelates.  But the one whose image the prelate bears is worthy to have his vicar honored, just as the blessed Virgin is worthy to have a painted image of her venerated, although the image itself is not worthy of such respect. (pp. 70-71)

There are two key points here.  The first is that when a man is a bad prelate, we should not pretend otherwise merely because of his office.  That, Aquinas says, would be a violation of the eighth commandment – a lie.  He also compares it to idolatry.  An image of Christ or of a saint has no value in itself, but only as a pointer to something beyond it.  When we focus on the image itself we turn it into an idol.  Similarly, a bad prelate merits honor only because of the office he holds.  When we pretend his personal faults are not real, strain to attribute good motives to manifestly unjust acts or hidden wisdom to manifestly foolish utterances, we are like someone who fixates on an image and pretends that the many flaws and limitations it contains as a mere piece of matter must somehow really be divine.

The second key point is that such a prelate nevertheless must be given the honor that attaches to his office as a vicar of Christ.  It is an insult to Christ to refuse his representative such honor – as if it is not Christ himself who is permitting such a man to be his vicar, or as if Christ does not know what he is doing in permitting it.

As I have discussed in detail elsewhere, according to Aquinas – and according to Catholic teaching more generally – such a prelate can and ought to be criticized publicly by his subjects when he does something that endangers the faith.  But given the nature of his office, even this must be done “not with impudence and harshness, but with gentleness and respect.”  And if the prelate in question is the pope, respectful criticism is the most one can do, because he has no superior on earth.  Christ alone can, and will, resolve the problem in his own time and in the way he judges best.

What these points together entail is suffering.  And suffering, as the lives of the saints attest and as scripture teaches us from beginning to end, is the lot of the righteous man – suffering penitentially, suffering in solidarity with others, suffering in unity with Christ’s own agony.  This suffering can result from our own sins, or from the effects of original sin on the world around us, or from persecution.  And sometimes it can come even from within the Church itself.  Christ promises only that she will not be destroyed or, in her decisive pronouncements, bind the faithful to error.  Short of that, she can be and sometimes is afflicted with evil of every kind, even at the very top.  This is permitted in part precisely to illustrate the truth of Christ’s promise.  Even bad popes cannot destroy the Church.

But Church history is not a Marvel movie, where everything works out in two hours, or at least by the next movie in the series.  As the Cadaver Synod, the Great Western Schism, and other episodes illustrate, it can sometimes take decades to resolve the problems resulting from papal folly, corruption, and mismanagement.  We modern Catholics are soft and impatient, and we need to recover the forbearance of our forebears.

Current events make timely the recollection of some words from Pope Benedict XVI, while he was still Cardinal Ratzinger, on the event of the death of Michael Davies, the well-known traditionalist Catholic writer and stalwart defender of the Tridentine Mass.  The cardinal wrote:

I have been profoundly touched by the news of the death of Michael Davies.  I had the good fortune to meet him several times and I found him as a man of deep faith and ready to embrace suffering.  Ever since the Council he put all his energy into the service of the Faith and left us important publications especially about the Sacred Liturgy.  Even though he suffered from the Church in many ways in his time, he always truly remained a man of the Church.  He knew that the Lord founded His Church on the rock of St. Peter and that the Faith can find its fullness and maturity only in union with the successor of St. Peter.  Therefore we can be confident that the Lord opened wide for him the gates of heaven.  We commend his soul to the Lord’s mercy.

End quote.  Notice that Cardinal Ratzinger acknowledged that Davies suffered from the Church – and that nonetheless, he remained loyal to her, and thus loyal to the successor of St. Peter.  This is an example we ought to strive to emulate.  We must suffer for the Church even when – indeed, especially when – we suffer from her.

Do not abandon your Mother

The Church permits criticism of popes under certain circumstances